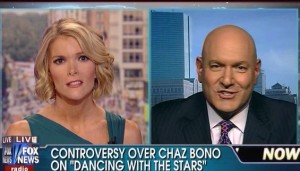 Chaz Bono was already considered to be one of most public transgendered individuals in pop culture history, but now that he is going to be participating in the ABC’s Dancing With The Stars, he has become somewhat of a political lightening rod fortransgendered persons. Fox News contributor Dr. Keith Ablow has been quite vocal in his dismay at Bono’s inclusion on DWTS, calling it “toxic” to our children, and appeared on America Live to defend his denunciation to host Megyn Kelly.

Ablow, who is a licensed psychiatrist, reacted to the news of Bono competing with an editorial piece denouncing ABC’s decision and, indeed, denying that transgendered individuals even exist. Here’s an excerpt:

Chaz Bono, the “transsexual” woman who underwent plastic surgery and takes male hormones in an effort to appear to be a man, and who asserts she is a man, will appear on the upcoming season of “Dancing with the Stars”, according to ABC, the network which airs the show. He will be partnered with a woman.

Casting Chaz Bono on “Dancing with the Stars” is part of Chaz’s victory tour, which has included appearances on talk shows and the release of a book called “Transition.”

I advise parents to not allow their children to watch the episodes in which Chaz appears.

Note Dr. Ablow’s use of both the pronouns “she” and “he” after referring to Bono as a woman. He continues:

The last thing vulnerable children and adolescents need, as they wrestle with the normal process of establishing their identities, is to watch a captive crowd in a studio audience applaud on cue for someone whose search for an identity culminated with the removal of her breasts, the injection of steroids and, perhaps one day soon, the fashioning of a make-shift phallus to replace her vagina.

It is a toxic and unnecessary byproduct of the tragic celebration of transgender surgery that millions of young people who do watch “Dancing with the Stars” will have to ponder this question: Maybe my problems really stem from the fact that I’m a girl inside a boy’s body (or a boy inside a girls body).

Kelly typically does a very good job of playing devil’s advocate in these sorts of on-air political debates, but in this instance she seemed to be genuinely disgusted by Ablow’s take, specifically asking “isn’t there enough hate?” and basically calling Ablow intolerant for his…well, lack of tolerance of Bono’s inclusion.

Watch the compelling segment below, courtesy of Fox News: