Megyn Kelly: Loretta Lynch Should Be ‘Most Acceptable’ AG Choice for GOP
video

Megyn Kelly: Loretta Lynch Should Be ‘Most Acceptable’ AG Choice for GOP 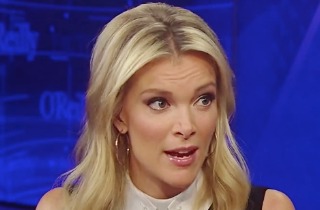 Bill O’Reilly and Megyn Kelly joined together tonight in praise of Loretta Lynch, the U.S. attorney in Brooklyn who’s poised to be the next attorney general. And Kelly in particular said Lynch should be the “most acceptable” choice to the right wing.

O’Reilly spent most of the segment pointing out that Lynch stepped up in a case where a judge sentenced a man guilty of raping two underage boys to two years in prison. At the time, O’Reilly really tore apart the judge, but had effusive praise for Lynch, who charged the man with a federal crime. O’Reilly said, “She is a hero and should be respected by all Americans for standing up to a gross injustice.”

And O’Reilly stood by that tonight as both he and Kelly talked about the case and Lynch. O’Reilly said he was “heartened” by how she acted in that case when she didn’t have to. Kelly went even further in giving Lynch due credit:

“This is the person who should be the most acceptable to the right wing of the Republicans in this country of anybody who President Obama was considering. She is a straight shooter.”

Kelly pointed out that Lynch doesn’t have close ties to the White House and is not an ideologue (as Eric Holder‘s critics have charged of him), and she’s “been a leader” in cracking down on gang crime and terrorism.