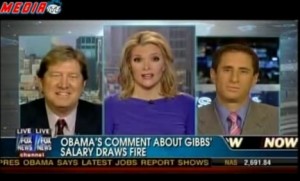 Kelly does a halfway decent job of calling “bullshit” on attempts to interpret Obama’s remark as a comparison to average Americans, but she lets slide, and even repeats, the lie that the Obama administration considers those who make $172,ooo a year “rich.”

It’s a pretty stunning oversight, especially given the way the $250k demarcation line was pounded into voters’ heads during the 2008 campaign, with a lot of help from Joe the Plumber. Without that canard, Kelly and Lewis really have nothing to talk about: (From Fox News)

First of all, of course the President was referring to Gibbs’ pay relative to a comparable job in the private sector. On that score, you also have to factor in that, as the Communications Director for President Obama’s campaign, Gibbs would be considered the very best in his field, the LeBron James of press secretaries.

You also have to remember that Obama was referring to Gibbs’ pay over the last 6 years, not just his current salary. Even then, let’s break that $172k down. That’s about $3300 a week, and even Megyn Kelly credits Gibbs with an 80-100 hour work week, in addition to being on-call 24/7. Even if you didn’t pay him overtime, Gibbs makes less per hour than a Registered Nurse, hardly a high-fallutin’ set.

What’s really a bit sickening, though, is that the same people who cried poverty over Joe the Plumber’s imaginary $250,000 a year salary are now trying to paint $172k Robert Gibbs as the Monopoly guy. What’s the common denominator? Shockingly, both presented opportunities to trash Barack Obama. There’s a word for that, one that conservatives applied to opponents of George W. Bush: deranged.