Megyn Kelly On Maternity Leave: ‘I Was In Tears Three Of The Five Days I Came Back’ 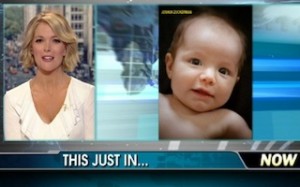 Megyn Kelly has the countenance of a strong and self-aware individual; in fact Mediaite has called her a “bad ass,” for the way she gives to tough nut Bill O’Reilly as good as she gets. Kelly’s recent return to work from a three month maternity leave had her dealing with the emotional challenges that many working mothers have to face, though in a much less public manner. The fact is, leaving children at home while going back to work is very difficult, and Kelly recently sat down with Mediaite to share some rather personal observations about her transition back to the airwaves.

Last week, Kelly was kind enough to sit down with us and candidly discuss a broad set of topics pegged to her return to work. That interview focused on her boss Roger Ailes, the public perception of Fox News, and her reaction to being comically targeted by Jon Stewart about her thoughts on entitlements (in the context of maternity leave.) The initial interview can be read here.

Due to the contrast in the subject matter, and its singular nature, we decided that the following portion, which deals with the much more personal challenge of balancing being a parent with being a productive, challenged and generally happy individual, merited publication on its own. Anyone who has small children and a full-time job likely empathize with the honest reactions from Kelly.

Mediaite: Coming back from maternity leave to work is a fairly common thing today, but rarely is that transition as public as it has been for you. So…how is it coming back from being primary care giver, mom of brand new baby bird infant, to the previous version of you, TV’s “Megyn Kelly”?

Megyn Kelly: It has been harder than expected to leave my two little ones. I thought I would be able to handle it seamlessly and with relatively little upset because I had been a working mother for 19 months when I went on maternity leave. But now I have two, and I’ve spent almost four months with them, and I will confess to you that three out of the five days I came back last week I was in tears in the morning. It’s just hard to hand your baby over to somebody else, and it’s hard when you have a two-year-old saying, “Mommy, mommy, don’t go!” People who don’t like Fox News will send me mean e-mails that said, “How could you leave your children? What kind of a mother are you?” and it just taps into such mommy guilt that’s already there, and you start asking yourself “How could I leave them?” But the truth is I like being a working mom, I think I would be a worse mom if I wasn’t doing what fulfills me in addition to mothering my children, so I’m trying to reconcile that I have more than one role.

” I will confess to you that three out of the five days I came back last week I was in tears in the morning. It’s just hard to hand your baby over to somebody else, and it’s hard when you have a two-year-old saying, “Mommy, mommy, don’t go!””

Mediaite: How do you find the balance between taking care of your little ones and what’s a pretty visible job?

Kelly: When I was on maternity leave, I was fulfilling on role, which was that of a mother. And a wife, of course, but primarily that of a mother. And I had no aspect of my professional self. Now that I’m back, I have both roles, it’s not that I’ve given up my mother role, I have three hours with them in the morning and, depending on the day, I have three hours with them in the evening, and I have my weekends with them all day. But I also have my full-time professional self back, and that’s also an important part of who I am. So I do feel more complete. When you ask who Megyn Kelly is, she’s not just a mother and she’s not just a news anchor. I’m both things. So there is a feeling of completeness in being back at the job.

Mediaite: I’ve been told by many new moms (and some dads) that coming off of maternity leave one can feel not as quick witted, or maybe a step slower after having a newborn. Have you experienced that? Maybe not as quick on the draw?

Kelly: I felt that much more so after I had my son than after I had my daughter. And I don’t know if that’s just because… after we had our first child, we basically didn’t leave our apartment for months. We were calling it the cabin, and so there really wasn’t a lot of intellectual stimulation going on back then for me or my husband, I think he would admit. But when I had my daughter, we spent a lot of time in the Hamptons, and we saw friends, we were a little more social. So I kept my brain working a little more than I did on the first maternity, but when I came back from maternity leave with Yates, my son, I was literally worried that I would go on the set with O’Reilly and I’d start saying, “You’re a good boy, aren’t you? No, you’re bad! Time out!”

Mediaite: I think you should talk to him like that! Wouldn’t that have made for a more interesting interview?

Kelly: [laughs] It probably would have.