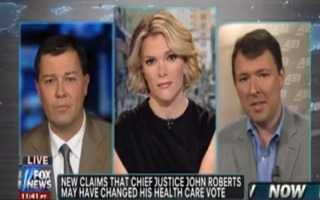 In a panel discussion on Fox News Channel’s America Live with Megyn Kelly, the guests tackled the Supreme Court’s decision in health care reform and the motivation for Justice John Roberts to side with the court’s liberal justices. In a heated discussion, a former speechwriter for President George W. Bush lamented the pressure that all federal judges face from “the Georgetown cocktail circuit or the New York Times” to side with the political left.

Kelly asked her guests about a CBS story which alleges Roberts decided to side with the Court’s liberal justices at the last minute to declare the health care law’s mandate constitutional. She asked her panel guests if Roberts was as bowing to “political pressure.”

“Almost no one on the left or the right are praising the judicial reasoning behind this decision,” said American Enterprise Institute fellow Mark Thiessen. He said that it was hard to peg whether Robert’s decision was politically motivated, but Thiessen said it was difficult to claim Roberts’ opinion was based on an interpretation of the law.

Thiessen accused Roberts of violating his pledges during his Congressional confirmation hearings to not legislate from the bench when he handed down his ruling on health care reform on Thursday. “He rewrote the statute to make the individual mandate a tax,” said Thiessen. “So, either he caved to political pressure or he legislated from the bench to reach a predetermined outcome. But, in either case, it is a terrible, terrible outcome.”

Kelly asked attorney Julian Epstein if he thought that Roberts’ decision was motivated by a concern for how posterity views his court above the law and, if so, “is that a legitimate motivation?”

“I would say not,” said Epstein. “I think the court needs to be guided by the rule of law.” However, Epstein said that the sources in this report in question were expressing “sour grapes” from the conservative side of the court. Epstein went on to say that he disagreed with Thiessen’s assertion that no one is praising the judicial logic that motivated the decision.

Kelly asked Thiessen if he thought Roberts was evolving in his judicial philosophy and moving farther to the left.

“The entire judicial culture – and political culture – pushes the court to the left,” said Thiessen. “So, if you’re a liberal justice, there is absolutely no pressure, from the Georgetown cocktail circuit or the New York Times or the Legal Academy, to vote with the conservatives. You’d be a pariah if you did.”

Epstein “It’s a very sad commentary on the state of affairs” when Roberts opinion – clearly based on legality, in Epstein’s opinion, is attacked as political. “It’s so well-rooted in 80 years of jurisprudence that, as the Chief Justice said – or at least as he intimated – it doesn’t even seem to be a close call.” He concluded by saying the court’s conservatives, if they leaked to CBS, have poisoned the relationship among their fellow justices.