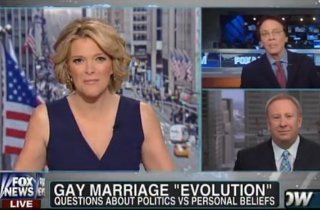 Friday afternoon’s America Live political panel took on the issue of politicians “evolving” on same-sex marriage, asking whether the shifts are cynical political moves or genuine changes in position. Using her colleague Bill O’Reilly‘s rebuking of Bill Clinton as a “phony” for having been against same-sex marriage when he was president, Kelly asked contributors Alan Colmes and Mike Gallagher whether the former president, his wife Hillary, and current President Obama are truly sincere in their policy evolutions.

“These guys are sticking their fingers in the proverbial winds and they are doing what politicians do,” conservative radio host Gallagher said before lambasting the Democratic Party for never criticizing their own party leaders for opposing same-sex marriage. “These guys just clam up and pretend at that everything they’re doing is honorable and Bill is right. It’s a big, fat phony disingenuous lie,” he said.

Colmes countered that Bill O’Reilly himself has “evolved” on the issue. Once being a vocal opponent of same-sex marriage, O’Reilly said on Tuesday that the cause’s opposition makes no compelling argument outside “thumping” the Bible. He then turned the issue back around on Republicans: “I thought we were talking about all the Republicans who ‘evolved’ on pathway to citizenship for immigrants, like Marco Rubio and Jeb Bush. By the way, Republican Lisa Murkowski has also changed her position on gay marriage. So let’s not act like it’s a one-sided issue.”

Noticing that Kelly’s list of flip-floppers did not include any of the Republicans who’ve switched on the issue in recent years, Colmes later added, “I believe it’s appropriate to point out that there’s been much flip-flopping and changes of opinion on the other side when it was politically convenient, and to just single out Democrats on this particular issue.”

Kelly said “it’s not just about the Democrats,” before suggesting her focus happens to be on three Democrats because they are former or current presidents or a former First Lady.

“I truly believe that there is sometimes nothing wrong with evolving and changing your position,” Colmes explained. “Or do you want a politician who never changes one’s mind ever on anything, and is it ever permissible for somebody to say I’m thinking it through?”