Megyn Kelly Panel Battles Over Whether The States Could Legally Secede From U.S.
video

Megyn Kelly Panel Battles Over Whether The States Could Legally Secede From U.S. 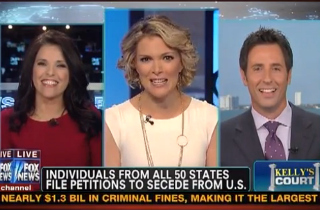 Today’s edition of “Kelly’s Court” on Fox’s America Live took on the growing movement for several states to secede from the United States in response to the re-election of President Barack Obama. Host Megyn Kelly and two legal experts battled over various hypothetical situations, gauging whether a state could legally secede from the union if a majority of its citizens wanted to do so.

Mercedes Colwin made the case that the Tenth Amendment to the United States Constitution is “very clear,” and that all unlisted powers are “reserved to the states respectively or to the people,” and that under the Texas State Constitution, its people “are free to change their government as they choose.”

Texas wanted to do the same thing they wanted to do today. They wanted to pull out of the union. Justice Chase wrote the following: ‘When Texas became one of the United States she entered into a binding and lasting relationship. The agreement was final. And Justice further wrote there was no place for reconsidering or revocation except through revolution or consents of the state.

Kelly added that since there is clearly no current “revolution” and the states won’t agree to let another one leave the union, how could any state possibly secede?

“It would take a civil war. That didn’t work out too well,” Eiglarsh responded. “People think that 100,000 signatures fairly represents what Texans want? That represents a third of one percent of Texas. As one person on Facebook wrote to me: ‘Those people are crazy. That’s not what we want.'”

Kelly jokingly told Eiglarsh not to “rip on the good people of Texas” before posing the hypothetical question: “Let’s say 99% of the folks down in Texas wanted to secede from the union and what if President Obama said, ‘Okay, go. You don’t want to be here, you can go.’ What would happen to the people in Texas who wanted to stay but would have to leave?”

Colwin replied: “They would move. If the federal government had a problem with this issue of secession they should have stepped forward to say that’s unconstitutional under federal law and they haven’t done that.”