Megyn Kelly Panel Spars Over Americans’ Dependence On The Government 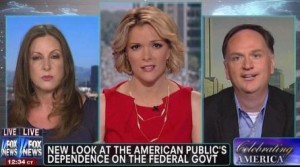 Megyn Kelly‘s panel debated the rise of American dependence on certain social programs, attempting to decipher the root cause.

She began by noting that nearly half of Americans live in a household where at least one member gets some sort of government benefit. “So just how independent are we really? And where is this trend going?” she asked. More than the raw numbers, Michael Graham argued, it’s the trend that’s concerning. Leslie Marshall further argued that if we’re looking at government programs like Medicare and Social Security, the trend isn’t likely to reverse going forward — as Baby Boomers are becoming seniors and entering the social programs.

But, she added, it depends on the program, noting that fewer Americans are on unemployment this year than last year, and fewer entered the food stamp program during the Obama administration than the Bush administration. There’s a divide, Kelly said, between the haves and have-nots, or perhaps more aptly, “the workers and work nots.”

On a larger scale, Kelly noted that her parents’ generation was “very uncomfortable” about government assistance. They’d work to repay their debts, taking on extra work even in retirement if need be. “There was an attitude,” she said, “that that is what you do.” She pondered, is that changing now?

Graham veered toward political reasons, also adding that it’s a cultural issue — that kids nowadays remain dependent on their parents for too long — while Kelly insisted she didn’t want to make the issue political.

Take a look at the panel, via Fox News: