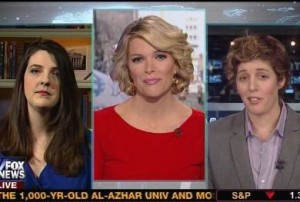 Trotter told Sen. Whitehouse that women would feel more vulnerable in a conflict situation than men would, thus the need for a gun as the “equalizer.” When Whitehouse agreed but added that there’s no reason for those women to have “assault weapons” in such situations, Trotter tore into him for not understanding what a women would need.

Addressing the controversy that erupted from Trotter’s remarks, her colleague Rittgers said, “It’s ridiculous to think there’s a one-size-fits-all when it comes to personal defense and the use of a firearm in one’s self defense. We have a natural right to self defense; the Second Amendment guarantees the right to bear and keep arms. And so we, as a people, have the ability to choose whatever means we see best.”

“That’s not what she was arguing,” interrupted host Megyn Kelly. “She wasn’t saying everybody has the right to deserve whatever capacity. She said to him, ‘You can’t understand because you are a man.'”

“Women naturally, generally speaking, are physically weaker than men,” Rittgers replied. “It’s quite obvious. Women are also targets of violent crime, of rape, of assault. We have to be able to match force with force.”

“Why does that mean she needs a 100 round magazine in her gun?” Kelly challenged.

“It’s a Bill of Rights; it’s not a ‘Bill of Needs,'” Rittgers responded. “The Second Amendment guarantees the right to bear arms. Justice Scalia wrote in D.C. v. Heller that the Second Amendment protects the use of common firearms. The AR-15 is the most commonly owned rifle.”

Liberal contributor Kohn disagreed: “When the Bill of Rights was written there weren’t hundred-round magazines and even conservative judges have said the Second Amendment has its limitations when it comes to public safety.”

When Kohn went on to claim that the national conversation has been “cloaked” as “trying to protect women from violence” when, in reality, Rittger’s organization as having opposed the Violence Against Women Act.

“I can’t let that go,” Rittger interrupted, “because there’s a big difference.” Kelly intervened to allow Kohn to finish.

“People who have been convicted of domestic violence right now they can’t get a gun except through gun shows because of the gun show loophole,” Kohn explained her final point.

“That’s absolutely ridiculous,” Rittger concluded. “You look at the guns sold at gun shows firearms dealers have to go through the FFL system to sell firearms. There are not these domestic violence perpetrators going out and buying guns off the streets from law abiding citizens, right? These people are already have a tendency to commit a crime.”

Watch the exchange below, via Fox: