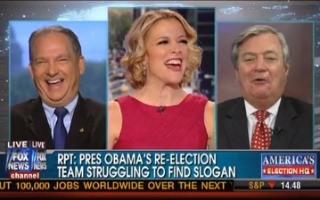 Kelly pointed to a quote by Bruce I. Newman, the former “brand-messaging adviser” to Bill Clinton, in Politico’s recent article on the matter, wherein he noted that Obama is “all over the place” in terms of messaging.

President Obama’s re-election campaign, however, denies that his recent, repeated use of certain phrases are attempts at creating a new campaign slogan.

Blakeman didn’t buy it. “When a President uses terms over and over again,” he said, “he’s testing to see whether any of those slogans are carrying any weight with the people he’s speaking to and, beyond that, the greater American people. Clearly, he is struggling to find the kind of message he had in 2008, which resonated quite well — ‘hope’ and ‘change’ was very popular. The problem is if the President were successful in delivering hope and change, he would’ve continued that slogan now and improved on it.”

Kelly then turned things over to Harpootlian, asking if President Obama needed a slogan in the vein of Ronald Reagan’s “it’s morning in America.”

“Well, I think that Barack Obama doesn’t need any message except the message which covers, generally, everything he’s talked about, which I think is ‘don’t screw it up, vote to re-elect the President’ or you take Bill Clinton’s ‘it’s the economy, stupid’ and change it a little bit in talking about Mitt Romney, ‘it’s the stupid, stupid.'”

“And a catchy phrase will not change,” he continued, “that Mitt Romney is going back to the past and Barack Obama is the future.”

Kelly asked Harpootlian for something just a lil’ “pithier” than that. “I can be pithy,” he said, rising to the challenge. “I can be real pithy… but, uh. I don’t think you want that on the air today.”

“I’ve got a pithy one for Dick,” Blakeman chimed in. “‘It could be worse.'” Harpootlian got a kick out of that one.

“It’s over, Dick,” Blakeman continued. “There is no Bush to blame.” Maybe “hope…less” would be a better slogan, he suggested.

The two men couldn’t even agree on how much it hurt to be dissed by Kelly last time they’d appeared in the studio.