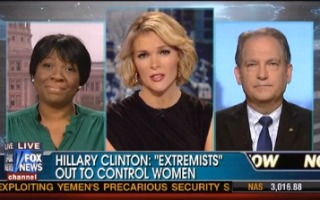 On Tuesday, Fox News’ Megyn Kelly invited Jehmu Greene — who is a former adviser to HRC — and Brad Blakeman, former deputy assistant to President George W. Bush, onto America Live to discuss recent comments made by Secretary of State Hillary Clinton during Tina Brown‘s “Women in the World” summit.

Extremists, Clinton had told attendees, are out to control women, “even here at home” in the U.S.

Blakeman felt Clinton’s comments were inappropriate for a diplomat because, as he phrased it, they were an attempt at expressing that “the plight of American women [is] in the same footing as those women in Afghanistan or Iran or North Korea or China.” As for her statements regarding the government’s attempts at controlling women’s bodies, Blakeman thought she’d been “talking about ObamaCare.”

Kelly then asked Greene to comment on radio host Laura Ingraham‘s assertion that it sounded as if Clinton had been “comparing the GOP to the Taliban.” Greene felt Clinton had been “absolutely right” to express what is happening in what Greene characterized as a “war on women” unfolding within the United States, giving Texas governor Rick Perry‘s “vicious, vicious attacks on women’s health” as an example.

Blakeman maintained that there’s just no comparing issues facing American women to those in places like North Korea or Afghanistan. “She’s trying to jump on the bandwagon of the press of the last two weeks,” he said, referring to the ongoing discussion surrounding women, contraception and health care.