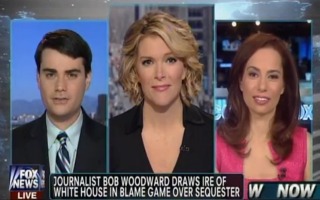 On Monday, a Fox News Channel panel discussed the White House’s attacks on reporter Bob Woodward for claiming in a recent book that the Obama administration was the original source of the idea for the sequester. Both panelists agreed that the GOP and the president were not being consistent in their messaging around the sequester, but also noted that this is the kind of inside-the-Beltway fight that turns off average citizens to politics.

Megyn Kelly chronicled the dust up between the White House and Woodward over an assertion made in his recent book The Price of Politics in which he reports that the idea for the sequester originated in the White House. The Obama administration says that is a mischaracterization of how events unfolded in the summer of 2011 when the sequester was approved by Congress.

“This is getting a little uncomfortable,” Kelly said to Breitbart News reporter Ben Shapiro and Democratic strategist Julie Roginsky. “They’re fighting with somebody they’ve loved so much – they gave him all his access to the White House – but they only love him apparently, Ben, when he’s saying what they want him to say.”

“I would imagine this is the last time Bob Woodward is going to have intimate access to the White House,” Shapiro replied. He said that the White House rewards reporters who behave as “lap dogs” and refuse to report information that the White house regards as being politically unhelpful.

“It’s one of those things of who do you believe,” Kelly asked Roginsky. She asked if Woodward has the most credibility on this issue or White House Press Sec. Jay Carney who called the assertions made by the famous reporter “willfully wrong.”

“This is such typical D.C. nonsense,” Roginsky said. She added that the politicians and reporters focused on blaming each other are missing the fact that the upcoming sequester cuts are what should be drawing the focus of both journalists and politicians.

“I saw this story, and I kind of said ‘a pox on both these houses’ – on the Washington Post and the White House,” Roginsky added.

Kelly challenged Roginsky, saying that if Woodward is right, he’s obliged to report the White House intentionally misleading the public. Roginsky dismissed this notion and said that it is simply not important to determine who came up with the idea for the sequester and when.

Roginsky said that both Republicans and the president’s messaging on the sequester was “crazy and inconsistent.”

“This is why peoples’ heads want to explode when they see this day in and day out,” Roginsky said. “I work in politics and I’m at the point where I can’t really take it anymore.”

“Were at the point now where we don’t really expect Washington to tell us the truth,” Kelly observed.