Fox Panel Includes Warm, Cozy Moment Between Atheist And Christian. Or Not. 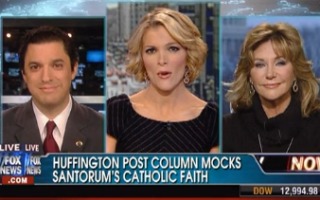 On Wednesday, America Live host Megyn Kelly tackled a recent Huffington Post column — titled “The Jesus-Eating Cult of Rick Santorum” — mocking the GOP candidate’s Catholicism. [Ed. note: If I can play an advocate of Satan for a moment, I suspect — mostly from the use of the phrase “unlike Christians,” — that Larry Doyle‘s HuffPost piece might be drawing a parallel to the way Mormonism have been discussed throughout the GOP race, including by former Mormons. Kelly noted that Doyle himself called his article a “ridiculously over-the-top broadside.”]

Kelly invited panelists Sandy Rios of Family-Pac Federal and David Silverman of American Atheists (You can see already where this is going, no?) onto the show to discuss the issue further.

“Satire is supposed to be amusing,” said Rios, “and this was far from amusing.”

When Kelly asked Silverman whether Catholicism is the only major religion that is seen as “ok” to bash or mock, he responded that “yes, we all have to have pity for the poor Catholic Church, the richest, most corrupt organization in the history of mankind.” He did concede, however, that the piece was “a little too over the top” and could have done without referencing Hitler.

Rios felt that Christianity is indeed seen as “fair game” for mockery, and that those on the left “roll over backwards” to protect Islam. That said, “religious institutions and constructs are man-made,” she later added, “and when a piece like this comes up, Larry is upset with the institutes — the Crusades, the pedophile priests, the Lutheran Church, who colluted with Nazi Germany. But that’s different than God Himself. The Christian God is very unique; He transforms lives radically. And when you really know Him — not the institutions — you’re willing to lay down your life for Him like that Iranian pastor who’s under death threat right now. The Christian God is remarkable and wonderful.” But the left “hates God” and so they “attack the constructs.”

Silverman, meanwhile, felt that any and every religion is “fair game.”

“Good luck, David, in believing in nothing,” Rios replied. “God loves you anyway.”

“Thanks for being snarky and have a nice day,” he countered.