Megyn Kelly Panel Spars Over Paula Deen Case: ‘Too Bad She Doesn’t Have Any Butter’ For Racist Comments 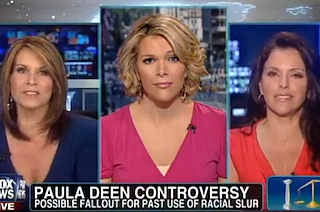 “Here’s the rub,” said Mercedes Colwin, a Fox News legal analyst. “The plaintiff is caucasian! She is not black…Where’s the racial discrimination here? It’s just an add-on. That’s the rub. She’s claiming that because, ‘I saw my colleagues being called the n-word, somehow that affected my emotional psyche.'”

“Oddly enough, it’s not even there,” Colwin said. “It’s in what she called ‘intentional infliction of emotional distress.’ It’s an add-on. ‘Call Paula Deen a racist, call her a bigot, it’ll give me more money in the end.'”

Former prosecutor Jonna Spilbor didn’t buy this, arguing that in no situation were racist epithets innocenent.

“She thinks if she’s joking around using the word—or, oh my god, planning a slave-themed wedding, because the waiters look so handsome and it was impressive—that that’s not racism,” Spilbor said.

“The plaintiff here has no standing,” Colwin countered. “She can’t come forward and say, ‘Hey, I’m white, but because I don’t like the way my black colleagues are being treated, I’m going to put that in their class action.’ It doesn’t work that way.”

Colwin and Kelly agreed that the majority of the complaints named Deen’s brother, whose behavior is characterized as more sexually aggressive, but that Deen’s wealth made her an enticing target.

“Most of the stuff is directed against the brother, but Paula Deen is the one with the big pockets,” Kelly said.