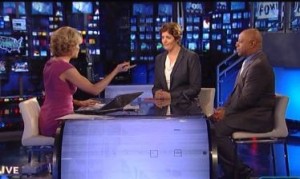 On Monday’s edition of America Live, host Megyn Kelly took a look at how enthusiasm over President Barack Obama measures up now versus during in first presidential run in 2008. Kelly showed a picture – snapped by a Romney campaign staffer – showing rows of empty seats at the stadium where Obama officially kicked off his re-election campaign in Ohio.

RELATED: ABC’s Jake Tapper To David Axelrod: Are Voters Less Enthusiastic About Obama This Time Around?

Webb chalked up the empty stadium seats to “bad planning in the long run,” and also used the fact that the media used the Obama campaign’s photo of the event – which showed the stadium from a different, fuller-looking angle – as a sort of sneak peek at how it will cover Obama’s re-election campaign going forward into November.

“Obama has a problem,” he continued. “Five million people have left the workforce, labor participation is low…”

Kohn and Webb both agreed that it’d be better to talk about policy issues than things like empty seats at empty events, with Kohn adding that the Romney campaign is trying to focus on anything but policy – hence this picture – because “the President has 25 straight months of private sector job growth.”

Kohn then noted that the President had managed to bring in 14,000 people, joking that the closet Romney can get to that number is when he’s firing people, which prompted Kelly to chuckle and Webb to shake his head. You may recall that, back in February, pictures emerged of Romney giving a speech on the economy to a mostly-empty Ford Field stadium in Detroit.

RELATED: Mika Brzezinski On Mitt Romney: ‘There’s Something Wrong With His People’

Webb warned that things are only going to become more negative and divisive as the election continues, referring to Republicans and Democratic Obama supporters as “workers” and “takers,” respectively.