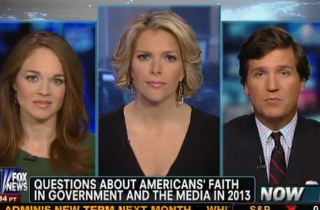 Today’s political panel on Fox’s America Live took on a recent poll which found that 36 percent of Americans, including 64 percent of Republicans, believe President Obama is hiding something about his background and early life.

Conservative panelist Tucker Carlson dismissed the findings, saying, “The same poll showed 36% of Democrat think that Bush was part of the 9/11 conspiracy theory. It’s a complicated world and people use these conspiracy theories to explain it when they don’t understand it. The real mystery is not where Obama is from — who cares — it’s the motives in doing the things he does.”

“Is this because, people talk about, ‘Was he born in Kenya?’ ‘Is he a Muslim?’ or is this because Barack Obama has some inability to break through the veneer and say, ‘I’m a regular guy. Trust me. I was born in Hawaii’?” host Megyn Kelly asked.

Liberal panelist Marjorie Clifton posited that the distrust stems from the fact that Obama “is a different kind of president than we’ve ever seen. He’s an African-American man, to start with. He’s also a little bit more academic. He’s one of those people that sort of internalizes and processes things before he comes out and states his policy. Very different from President Bush and Clinton.”

She added that Obama has been “vetted through two presidential campaigns” and yet conspiracy theorists and birthers like Donald Trump “come forward and try to create questions” to “create a media buzz,” which could “impact public opinion.”

Kelly then pointed out that there are still calls on the right for Obama to release his college transcripts and asked, “Should we not be so dismissive of the 36% of americans w have questions about that?”

Carlson responded: “To answer basic questions about his background — I’m not sure how relevant they would be; it wouldn’t change my view of his political ideas, which are wrong — but he deserves to be asked the questions.”

He also took exception with Clifton’s claim that the president was vetted. “He was not vetted much by the press,” Carlson said. “Most reporters felt in ’08 and 2012 it was pretty important that this guy be elected president, a historic figure, good guy, one of us, academic and intellectual, they didn’t do a deep dive on Barack Obama. There were very few hard-nose reporters in the campaigns. Trust me, I was there.”

Ultimately, the panel agreed, these conspiracies arise from people being “bored” and needing “some kind of intrigue in life.”

“Most of the power of the country is concentrated in a relatively few number of hands, and it’s a very complex series of systems that run the world,” Carlson concluded, “and most people don’t understand them and are frustrated by that and resort, sadly in my view, to sometimes fantastical conspiracy theories to explain them.”