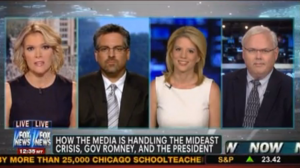 On Thursday, Megyn Kelly‘s panel tackled the recent outrage over Mitt Romney‘s response to the attacks in Libya and Egypt. While we should have been focusing on the events themselves and questioning the Obama administration, the panel agreed, the narrative fixated on Romney — revealing a less-than-subtle “media bias.”

Following Kelly’s rundown of some of yesterday’s headlines (about Romney and Egypt), The Weekly Standard’s Stephen Hayes said the coverage wasn’t fair. The “biggest problem with the way the media have covered the events of the past 36 hours is the fact they looked first at Mitt Romney, sought to blame him and basically ignored all of the very the serious and important questions about what happened to cause this on the ground in Libya and Egypt,” he argued.

Kelly gave her recap of the situation and noted that even with the discord between the statement from the U.S. embassy in Cairo (and the Washington later saying they never authorized it), “the narrative yesterday was how awful Gov. Romney was for pointing it out.” Indeed, the outrage over Romney’s comment has “overshadowed” any outrage over the actual incidents, Kirsten Powers chimed in — calling the narrative “absolutely, utterly insane.” Powers noted that even if we hypothetically were to agree that Romney shouldn’t have responded the way he did, “it still would not explain the obsession with Romney’s statement over these horrific events unfolding in front of us.”

This is why conservatives decry a media bias, Bill McGurn said: “It’s not that they’re supporting President Obama’s positions, but they support the framework.” Kelly then posed the kind of hypothetical that often comes up in discussions about media bias: How would the media have reacted had this happened under the Bush administration?

“It would’ve been completely, radically different,” Powers asserted. The media would have questioned why it took so long for the White House to distance from the embassy’s statement, she noted. On that note, Hayes remarked that he was “shocked” that it took the Obama administration as long as it did to respond — and that’s why Romney “was right to make the substantive critique that he did.”

Regardless of the embassy statement, Powers said Obama’s own responses haven’t been any better. “We could not have had a weaker response to this if we sat around and tried to think of what was the weakest thing we could do,” she said. They’re condemning the movie as if it caused the attack, she said, noting that “fanatics” will attack us with or without a movie.