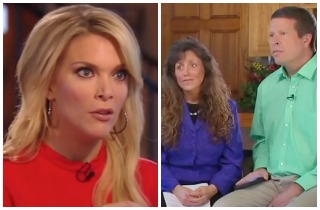 We have been covering Megyn Kelly‘s big interview with Jim Bob and Michelle Duggar tonight, but there was one particular exchange worth highlighting: Kelly pressing them on the question of hypocrisy. The Duggars are very well-known for preaching Christian conservative family values and have made some pretty questionable comments about threats from gay people, and Kelly asked how they were “preaching about moral values” or “calling other people sinners when you yourselves are sinners.”

She was, of course, referring to how a teenage Josh Duggar molested several of his younger sisters. Jim Bob Duggar explained that he had touched them multiple times, over and under their clothes, but they didn’t understand what had happened until it was explained to them later.

On the question of hypocrisy, the family patriarch said that his son “violated God’s principles” and “what Josh did was inexcusable, but it was not unforgivable.

Kelly also brought up a robocall Michelle Duggar did warning about transgenders and saying, “I don’t believe the citizens of Fayetteville would want males with past child predator convictions that claim they are female to have a legal right to enter private areas that are reserved for women and girls.”

She told Kelly, “Protecting young girls and not allowing young men and men in general to go into a girls’ locker room is common sense.”

Duggar also claimed “there’s an agenda and there’s people that are purposing to try to bring things out and twisting them to hurt and slander.”