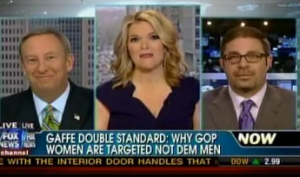 Last Sunday, Democratic Senator Chuck Schumer appeared on CNN to discuss the debt ceiling, but made other headlines when he mistakenly referred to the “three branches of government” as the House, the Senate and the President, but left out the Judicial branch of government. Today on Fox News, Megyn Kelly explored why if Sarah Palin or Congresswoman Michele Bachmann made the same gaffe, it would have been headline news everywhere as opposed to the scant coverage Schumer received.

Democratic strategist Dan Gerstein‘s rationale for the different treatment was that “people think Chuck Schumer is very smart, and they think that for a reason, because he is really smart, so he will get some latitude.” In other words, it seems in Gerstein’s view, that since the jury is out on Palin’s and Bachmann’s intelligence, then jumping on every verbal mistake they make is fair game? Kelly accurately summed up the concern with some fun word choice, wondering “could there be some sexism in saying those two, the pretty ones on the right, they’re the dum-dums, but this guy over here, he’s a smarty-pants?”

Conservative commentator Mike Gallagher attempted to back her up, arguing conservative women are unfairly targeted and claimed that since Schumer is on the Senate Judiciary Committee, and still forgot the Judicial branch, then clearly he’s not that smart. Yet Kelly threw some cold water on his argument by bringing up a quote Gallagher himself said about liberal Congresswoman Nancy Pelosi: “I simply said if you threw a bucket of water on her it would be interesting to see what happens.”

When I wrote about Schumer’s appearance immediately after it occurred, I did not sweep his gaffe under the rug, but I wrongly predicted that “despite some feelings being hurt with the Supreme Court, such little verbal mistakes should not ruffle too many feathers.” Well, given the recent treatment of Bachmann and Palin as of late, and the hysteria that any mistake they make creates, maybe Schumer’s gaffe in fact was deserving of a brighter spotlight. However, it does seem preferable to have members of both political parties feel like they have the freedom to completely express their thoughts, rather than constantly fear being victim of a “gotcha media” eager to exploit any and every verbal mistake.