Megyn Kelly Rails Against Suspect’s Receiving Welfare: ‘Don’t We Deserve To Know If We Paid For That Bomb?’ 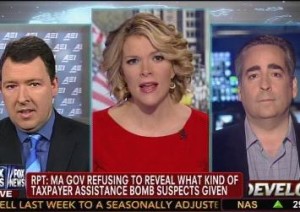 Yesterday afternoon, the hosts of The Five expressed their outrage over the fact that at least one of the Boston bombing suspects received Massachusetts state welfare payments. Today on Fox News, Megyn Kelly took on that news along with reports that Governor Deval Patrick (D-MA) is “refusing to release any records on taxpayer-funded benefits the accused bombers may have been receiving.” She asked her guests, “Don’t we deserve to know whether we paid for that bomb?”

John Hlinko, founder of Left Action, said it would be “outrageous” if it turned out the bombings were “funded” with taxpayer money, but warned against jumping to conclusions about what the assistance they were getting really means. “Is it just an excuse to attack welfare recipients?” he asked. Hlinko thought the focus on the welfare payments was misguided, saying what’s “truly outrageous” is that “you can buy guns and explosives on the terror watch list. What aren’t we addressing that?”

The American Enterprise Institute’s Marc Thiessen, despite being on the other side of the political spectrum, appeared to agree with Hlinko that the welfare issue is not the most important concern about the suspects. “The problem here is not that these terrorists were on the welfare rolls, the problem is that they were taken off the terror watch list.” In fact, Thiessen stated that it would have been problematic to remove the brothers from the welfare rolls when the FBI and CIA were alerted about the older Tamerlan Tsarnaev by Russian authorities, because it may have tipped him off that the government was onto him.

While neither of her guests seemed to think the welfare issue was a big concern, after a break, Kelly steered the conversation back to the question of why the U.S. government would allow someone on a terrorist watch list to continue receiving payments. Thiessen reiterated his point about why the FBI may have resisted sharing their information, while getting in a small dig at Massachusetts’ liberal reputation. “I wouldn’t trust the People’s Republic of Massachusetts welfare people not to tip off the terrorist by cutting off the welfare benefits that he was on a terror watch list.”

“I want to defend Massachusetts,” Hlinko replied. “The indication that Massachusetts in particular can’t be trusted, maybe was unintentional, but that’s really not fair.” Again, he diminished the significance of the welfare question, asking, “are we really going to do background checks for receiving welfare but not background checks for guns and explosives for someone on the terror watch list? Do we understand how absurd that prioritization is?”

In the end, neither of Kelly’s guests were inclined to follow her down the path of blaming the welfare system for funding the Boston attacks. While one can certainly question who is and is not deserving of government assistance, in the story of the Tsarnaev brothers these two ideologically opposed men showed there are larger questions at stake.