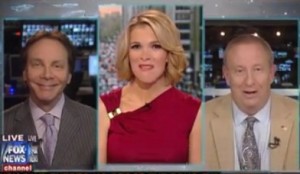 On America Live Friday afternoon, host Megyn Kelly played referee in a shouting match between Fox News liberal embed Alan Colmes and conservative radio host Mike Gallagher over supposed outrage at Democratic support for Occupy Wall Street. Colmes chided Gallagher, and the media, for focusing on the actions of a small number of protesters, but what really set Gallagher off was Colmes’ comparison of OWS to the Tea Party.

At issue are reports of violence, sexual assaults, arrests, and attention-getting moments of silence at OWS protests, which Gallagher says prove that “these occupy wall street dregs are a bunch of anarchists, they’re lawless thugs, and it’s been nice to see the entire country turn against them.”

While he’s right that the movement has waned in popularity, Colmes points out that this is more a function of the media’s “if it bleeds, it leads” fixation on conflict. “The media, of course, wants to focus on the small group of people that are causing disruption,” Colmes says, “but I think it’s also important to urge them to peacefully demonstrate, to take the lead of what Gandhi and Martin Luther King talked about, the whole list of things you can do not to lose sight of the larger message, which I think is a good one.”

Gallagher predicted that the Democrats would pay a price for their support of Occupy Wall Street. “Democrats have stepped in it in a big way,” he said, “and the big picture you raised, Megyn, is to wonder about the support, the unfettered support that Barack Obama, Nancy Pelosi, Debbie Wasserman-Schultz and all the rest of them, I haven’t heard a single democrat denounce these lawless thugs.”

His characterization is an oversell (everyone from President Obama to Mitt Romney has expressed some sort of sympathy for the movement’s underlying frustrations, hardly “unfettered support”), but he’s right that Democrats are more closely associated with the Occupy movement than Republicans, and if the movement becomes identified with the peripheral violence, Democrats could pay a price. However, there’s no indication that public support for proposals like those contained in the President’s American Jobs Act has been affected at all.

Things really got heated, though, when Colmes suggested that the Occupy and Tea Party movements “have a lot in common,” eliciting a comical, “How DARE you!” from Gallagher.

“You are utterly disingenuous,” Gallagher said, prompting an objection from Colmes over the personal attack. “Zip it for a moment,” Gallagher shouted, “and let me respond to your scurrilous comparison to the Tea Party movement, a bunch of patriots who love the Constitution, who aren’t breaking the law. Are you kidding me, Alan?”

Much has been made over the difference in the way the media covered the Tea Party and the Occupy protests, and while there are some fair gripes to be made, the assumption that it’s ideological is, in my opinion, a mistake. It’s true that the media was quick to publicize the flaws and the misbehavior of some in the Tea Party movement, and that coverage of the Occupy movement has been, in many ways, more favorable.

What critics like Gallagher ignore, though, is the fact that the Occupy movement gained momentum with the press, and sympathy from the public, based on early images of police attacking non-violent protesters, a pattern that has continued. There’s no way to know how the media would have covered Tea Partiers clashing with police, but it’s a safe bet that pepper-spraying a little old lady makes the news, either way. To reverse the equation, how would the media react if Occupiers were bringing firearms to protests, as some Tea Partiers did?

Here’s the clip of Colmes’ and Gallagher’s battle, from America Live: