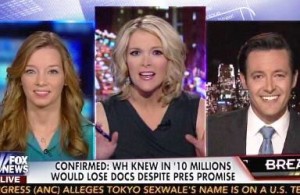 Megyn Kelly was completely shocked, to say the least, about the news that the White House knew as far back as 2010 that many people would lose their health care plans when Obamacare kicked in, and confronted Democratic guest Mark Hannah when he attempted to defend how the rollout’s been going so far.

Kelly asked, “Was he intentionally misleading, or was there some argument that he was grossly mistaken?”

Hannah argued Obama was “absolutely correct,” explaining that “these plans don’t offer the basic protections that the president has been saying all along are required in any insurance plan unless it has been grandfathered in beforehand.”

But Kelly wasn’t satisifed. She yelled, “Mark! He said ‘period,’ he said if you like your plan you can keep it PERIOD!”

Kristen Soltis Anderson piled on that if any part of someone’s insurance plan was changed at all, “then the grandfathering gets thrown out the window.” When Hannah kept trying to defend the program, Kelly snapped, “No, no come on! Respond to my––I know you can bridge away to a happy place for you.”

Hannah argued the media could have been covering this a while ago but “maybe it was underreported.” Kelly mockingly shot back, “It was my fault, it was the media’s fault, it was the American people’s fault, because they should have understood that period did not mean period.”