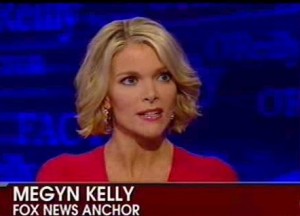 Fresh from her confrontational interview with Dr. Keith Ablow over his transphobic Chaz Bono editorial, Fox News anchor Megyn Kelly appeard on The O’Reilly Factor to discuss her criticism of her Fox colleague. While allowing that Ablow is a “good guy,” Kelly wouldn’t back down, and even called Ablow’s rhetoric “irresponsible and dangerous,” noting that transpeople are already “persecuted,” and that “there are people that will react to that the next time they see a transgender person at the McDonald’s.”

Fox contributor Dr. Keith Ablow earned Kelly’s ire with an editorial he penned that urged parents not to watch episodes of Dancing With The Stars that feature famous transgender man Chaz Bono, for fear it might cause those kids to grow up and become transpeople, themselves. The piece drips with the kind of pronoun bigotry, ignorance, and dehumanization that fosters hatred of this oft-persecuted group.

Host Bill O’Reilly seemed to want to play the role of peacemaker, and while Kelly was personally gracious about Ablow, she wouldn’t allow that relationship to marginalize her strong, visible disgust with Ablow’s opinions about Chaz Bono.

O’Reilly starts out by extracting assurances from Kelly that she still thinks Ablow is a “good guy,” and after she recaps Ablow’s commentary for the audience, asks her, “Might it be that Ablow thinks that this might be adding to the confusion for teenagers?”

Kelly explains that Ablow goes beyond that. “He seems to be arguing it will provide the solution to them,” and points out, again, that Ablow’s fearmongering is unsupported by science.

“That misses the point,” Kelly says. “I don’t think Ablow’s a bad guy, but, but, that doesn’t mean his words won’t lead to that. What he did, in my view, with respect to Keith, because I do think he’s a good man, was irresponsible and dangerous, and could result in some real problems.”

“This group already undergoes enough discrimination, and violence,” she continued, as O’Reilly tried to interrupt. “No, don’t talk over it, Bill…This group of people is persecuted already, and now you’ve got Dr. Ablow telling people that if your kid sees one in a manner that is akin to a celebration, your kid may wind up being one of them. Now, there are people that will react to that the next time they see a transgender person at the McDonald’s, or at some group event, and that’s irresponsible.”

O’Reilly seemed disappointed that he couldn’t talk Kelly down, and suggested having her on with Ablow in the future.

Here’s the clip, from The O’Reilly Factor: