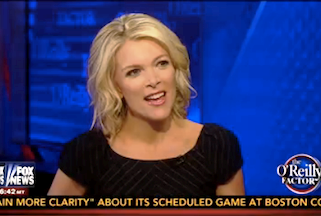 Megyn Kelly made her triumphant return to Fox News Thursday night in a guest spot on The O’Reilly Factor ahead of next week’s debut of The Kelly File, her new 9pm primetime show. Kelly weighed in on the big news of the day and previewed what viewers can expect from her new show.

Since Kelly left on maternity leave earlier this year, the country has seen the Washington Navy Yard shooting and today’s fatal car chase on Capitol Hill. “I really think I’m at the point where I no longer want to utter the names of these people at all,” she said. “I think we should all do it. If they want to find out the names of these people who do this, who shoot up places or take themselves out in the a blaze of glory, go look it up online if they need to know the names.”

After discussing other recent stories about the SUV driver who was attacked by a motorcycle gang and the Michael Jackson lawsuit verdict, they moved on to talk about The Kelly File, a name O’Reilly accused Kelly of stealing from him. “That is correct,” Kelly said, “but only because you are always promising me the last word and you never give it to me, and now I’m going to get it.”

O’Reilly predicted that Kelly’s “magnetic presense” will drive her ratings numbers “through the roof.” But Kelly assumed O’Reilly that her show will be a “news” program and not an “opinion” program. “I’m not going to be the female Bill,” she said, “tempting as that is.” She said that the new show will not have any more opinion than her old afternoon show, a change that may come as a shock to those used to watching Sean Hannity at 9pm.

“If you need any advice, because you are going to get a little heat in primetime,” O’Reilly told Kelly, “my door is always open.”