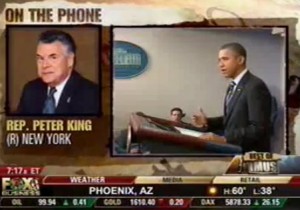 House Republicans have taken a decent share of ridicule over their cinematic motivational rituals, but now, they’re even taking friendly fire over their use of the film Braveheart‘s central character, William Wallace, to get pumped about the payroll tax cut fight. In an interview with Fox Business’s Connell McShane, Rep. Peter King (R-NY) said he was in the Braveheart meeting, and was thinking “Mel Gibson was also in Gallipoli, which was one of the worst military defeats ever.”

“That (the Gallipoli campaign),” King continued, “was also one where they went charging in, the British were convinced they were going to win, and they got wiped out, and that’s what I saw happening to us.”

McShane also asked King if he thought this defeat would jeopardize Rep. John Boehner‘s position as Speaker of the House.

“The only person who might be saying that,” King replied, “is probably someone who said we should have turned down the Senate deal and fought to the death on this. That would have been a fight to the death. It would have killed all of us and hurt the American people.”

While Tea Party supporters and members of Congress may be inclined to blame Speaker Boehner, the real question here is what political price the Tea Party caucus pays after this. Will Speaker Boehner and the Republican establishment try and figure out a way to get them to sit down and shut up going forward?

Here’s the clip, from Fox Business’s Imus In The Morning: