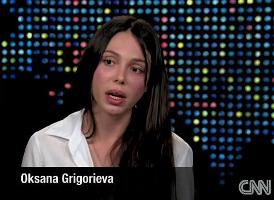 Talking to CNN’s Larry King in an interview aired Wednesday night, Oksana Grigorieva said she recorded the infamous phone call with her ex, Mel Gibson, because she thought he was going to kill her, and she wanted to leave evidence behind for her mother, “to be able to prove that if I’m dead that this is who did it.”

In the interview, Grigorieva’s first, lawyer Martin Garbus calls Gibson’s claims that Grigorieva released the phone calls as part of an extortion attempt “a phony charge.”

Another surprise in the King interview–Grigorieva says most of the worst incidents, including her charges of repeated domestic abuse–never involved the star being drunk. “There was no liquor, not once. He never drunk.”

Here’s King’s questioning on how those phone calls ended up on tape, from CNN:

KING: And you taped him?

GRIGORIEVA: No. I did not tape him until about 11:00 at night. He started to called me from 8:00. I called his assistant. I was trying to get the number of his psychologist to help him out. I was still trying desperately to help him out. I knew this is not the man who I fell in love with. This is his illness speaking because this profanity, this anger, this rage, I mean, unforgivable.

KING: So why, Oksana, did you tape him?

KING: He’s going to come over and kill you.

GRIGORIEVA: Yes, that’s what he said in those tapes. If you heard them without any interruption…

KING: They were evident.

GRIGORIEVA: Yes. I mean, I have none edited and it’s pretty frightening and it’s completely unforgivable.

KING: So, you were taping him and you thought that you would be killed and wanted to world to hear this?

GRIGORIEVA: I wanted my mother to be able to prove that if I’m dead that this is who did it. Because she already witnessed that too, you know, these certain violence back in December that he showed quite a bit of a violence. But another, another reason was, it’s very strange. The victims, I think they’re really decent human beings, because they’re trying to — they cover up perpetrators. They’re trying to help them. In the back of my mind, I thought, if I don’t get killed tonight, then I’d like him to hear what he sounds like…

Grigorieva’s claim that she made the recording–without Gibson’s knowledge–in fear of her life would address the question of whether the recordings violated California law. As Mediaite founder and NBC Chief Legal Analyst Dan Abrams said in an interview on the Today Show back in July, the tapes could be admissible in court if Grigorieva believed her life was in imminent danger.