Melissa Harris-Perry: Abraham Lincoln Was ‘My Favorite Kind of Racist’ 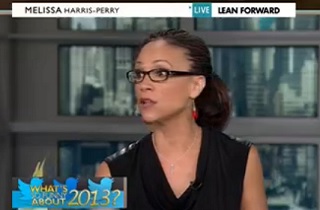 The slow news-fueled firestorm around an MSNBC panel on Sunday’s Melissa Harris-Perry show has obscured everything for the past few days, including other parts of that show which were entertaining and provocative. One such moment occurred during the segment that followed the now-infamous Kierangate spot, a review of possibly-racist tweets from 2013. When one panelist observed the conservative tendency to name-check President Abraham Lincoln, who “was kinda racist,” host Melissa Harris-Perry responded that “Abraham Lincoln was my favorite kind of racist.”

After discussing the RNC’s problematic tweet about Rosa Parks “ending racism,” panelist Jamie Kilstein volunteered that “My newest pet peeve with the Republicans, I was watching MSNBC, I was watching and they brought on a white racist Republican,” he began, to a mock-astonished “No!” from Harris-Perry.

To laughs from the panel, he added, “It’s like, yo, if that’s the last dude you have who wasn’t racist, back in the Civil War with the top hat, who was also kind of racist, you are in a terrible position!”

“I will say, Abraham Lincoln was my favorite kind of racist,” Harris-Perry noted, adding “I really don’t care if you have bad emotions about me, if you end slavery, I’m all like ‘I do not care.”

Harris-Perry and Kilstein were referencing President Lincoln’s complicated relationship with racism, which included things like this passage from a presidential debate speech in 1858:

While I was at the hotel to-day, an elderly gentleman called upon me to know whether I was really in favor of producing a perfect equality between the negroes and white people. [Great Laughter.] While I had not proposed to myself on this occasion to say much on that subject, yet as the question was asked me I thought I would occupy perhaps five minutes in saying something in regard to it. I will say then that I am not, nor ever have been, in favor of bringing about in any way the social and political equality of the white and black races, [applause]-that I am not nor ever have been in favor of making voters or jurors of negroes, nor of qualifying them to hold office, nor to intermarry with white people; and I will say in addition to this that there is a physical difference between the white and black races which I believe will forever forbid the two races living together on terms of social and political equality. And inasmuch as they cannot so live, while they do remain together there must be the position of superior and inferior, and I as much as any other man am in favor of having the superior position assigned to the white race. I say upon this occasion I do not perceive that because the white man is to have the superior position the negro should be denied every thing. I do not understand that because I do not want a negro woman for a slave I must necessarily want her for a wife.