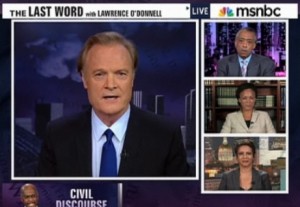 On Friday’s The Last Word, host Lawrence O’Donnell devoted two segments to the fallout from his polarizing interview with GOP rising star Herman Cain. O’Donnell acknowledged getting strong positive and negative reactions from friends and colleagues, and invited a panel consisting of Rev. Al Sharpton, The Grio‘s Goldie Taylor, and The Nation‘s Melissa Harris-Perry to discuss the interview. Albeit in a sweet, collegial fashion, Harris-Perry absolutely nailed some of the reasons for those negative reactions.

For his part, O’Donnell seemed to realize that something was wrong, by virtue of the fact that he devoted so much time to the issue, but while the result was a fascinating discussion, the entire exercise felt more like damage control than anything else. Over the course of the two segments, O’Donnell says a lot of the things he should have said to Cain, but never really owns up to what he actually did say.

He told his panel, “I just want to assure you at the outset I wasn’t trying to instruct anyone on how to handle themselves at that time in the South, or any parents.  And I think if I had been a parent in that situation at that time, I probably would have given the exact advice Herman Cain’s father gave his children.”

You would never know that from the way O’Donnell actually posed his question to Cain about his father’s advice.  His question, “Where do you think black people would be sitting on the bus today if Rosa Parks had followed your father`s advice?” was a clear indictment of that advice, and an accusation of racial cowardice. Whatever O’Donnell was trying to do, this is what he actually did, and he should have acknowledged that.

He also accused Cain of “sitting on the sidelines” during the Civil Rights movement, another clear implication of cowardice, and an obvious shaming tactic, although now he says, “I was trying to highlight, there was a moral question in front of you, history came to your doorstep.  Do you have regrets?  That`s all I was asking about.  Do you have any regrets about how you handled it?”

Had he actually asked that question, O’Donnell might have gotten an illuminating answer. As his panel pointed out, there are fair questions to be asked about Cain’s attitudes then, and now.

O’Donnell’s panel, meanwhile, fleshed out some of the contradictions of Herman Cain’s candidacy and personal story that illustrate just which opportunities O’Donnell missed by attacking Cain the way he did. Rev. Al Sharpton observed, “when he calls demonstrators in the ‘Occupy Wall Street movement,’ many of who are operating in the tradition of these same tradition of public demonstrations the civil rights movement did then and now, when he calls that un-American, I think that`s a legitimate question to ask him, because how can you call people un-American for assembling and protesting now and not then have considered those same tactics un-American then?”

Cain’s expressed gratitude for Rosa Parks and the Civil Rights movement also cuts against his view that people ought to “blame themselves” if they’re unemployed, or if they’re not rich, and also against the greater individualist narrative it illustrates. While Cain shouldn’t be shamed for following his father’s advice, and for working within the system to become a success, neither should he act like he did it all himself. The Civil Rights issue is a vivid example of collective action succeeding where “personal responsibility” could not, but the principle applies broadly.

Just as all Americans share in the building of successful businesses, so do those businesses share some responsibility for the inequity that has resulted. Every wealthy individual and corporation stood on our backs to get onto that ladder, and now that the rungs are all broken, fixing them is our problem alone. Cain’s 9-9-9 tax plan, for example, overwhelmingly shifts the burden of maintaining that ladder onto the folks who can’t even reach it.

O’Donnell also missed a great opportunity when he nonsensically asked Cain when it was that he “chose to be straight,” a showboating question with no real value. Instead, he could have asked Cain to square his gratitude for the Civil Rights movement (which, among other things, recognized the rights of black people to marry whoever they wanted to) with his opposition to marriage equality.

With the benefit of hindsight, O’Donnell told Melissa Harris-Perry that he didn’t “want to oversimplify the menu of choice that existed for black families in the South at that time,” although that’s exactly what he had done when he suggested that Cain “sat on the sidelines” rather than participating in demonstrations.

Harris-Perry wisely identified the problem with the manner of O’Donnell’s questions. She said that she was “squirming with discomfort” while watching the interview, and in explaining that discomfort, kindly employed the “royal we,” rather than point the finger directly at her colleague. “When we are not facing the lynchers’ noose,” she said,  “when we are not facing that imminent violence, ourselves, we have to be extremely careful about even the implication that those who did not participate were necessarily cowards.”

She pointed out that “it was always simply a minority of African-Americans who were engaged at any point in the civil rights movement because it was a life and death question.”

The implication of O’Donnell’s questions, though, was that any black person who didn’t participate was a coward, when in fact, just being black in the Civil Rights era was an act of bravery. The cowards were the people they fought, the people who sought to preserve a legacy of oppression and murder. The cowards were those white people who had access to the levers of power, who knew that system was wrong, and who did nothing.

Harris-Perry also nailed the inherently racist double-standard embedded in the Civil Rights line of questioning. “I can`t remember anyone ever asking a white politician who is of the same age where they were during the sit ins. As you pointed out in your interview, there were white students who came down to be part of freedom summer. There were white allies at every point.”

“Yet we don’t consider it a litmus test for white politicians to have had enough moral courage, ethical vision and American value to have participated actively in the civil rights movement,” she continued, pointing out that military service is a common such litmus test. “I”m worried when we don’t ask white politicians about their patriotism related to how they have or have not stood up for racial equality.”

Sharpton and Taylor went on to criticize Cain over his “brainwashing” remarks, but Harris-Perry extended that criticism, that black people don’t think for themselves, that they vote as a herd, to some liberals, as well. “…you hear a lot on the left these days calling African-American
voters Obamabots, or Obama drones, for continuing to support the president of the United States,” she said. “… that is precisely the kind of infantilizing of adult persons who are citizens of these United States that is so troubling…it was troubling to hear Herman Cain do it. It is trouble when it happens from white allies on the left.”

To be fair, O’Donnell obviously recognized some of the problems with his interview, as evidenced by the time he spent on this. He even closed the second segment by reminding viewers that “Melissa Harris-Perry is not the only friend of mine who had exactly that uncomfortable reaction to what they were watching.”

But for a guy whose stock-in-trade is to graciously offer interview subjects the chance to apologize for things, O’Donnell conspicuously took a pass here.

Here’s the video for both segments, from MSNBC: