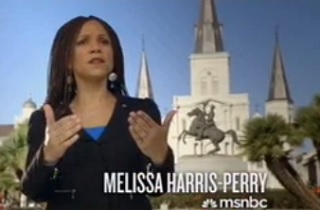 The greatest threat to Freedom since “French” fries and the so-called “Dixie Chicks,” Melissa Harris-Perry, is at it again, Lean-ing Forward into another commie-pinko screed on behalf of MSNBC. The host of a dangerously eponymous weekend show, Harris-Perry has dominated headlines for weeks with her relentless assault on individual parental rights, but has now opened another can of Organic Free-Range Whoop-Ass on Freedom™. Her target this time? Job-creating motivational factors like hunger, illness, and exposure to the elements. Oh, right, and education. What is it with these people and education?

In her newest promo for the “Lean Forward” network, Harris-Perry begins by opining that “Americans will always want some level of inequality, because it’s a representation of meritocracy,” and generously allows that “People who work hard and sacrifice and save their money and make major contributions — we think that they should earn a little more.” (emphasis mine.)

Oh, really? Is it okay with you that if I work hard to bundle worthless mortgages into toxic securities, and get the government to buy them off of me when things go south, that I make “a little more” money than some lazy slob on a construction site? Gee, well, thank you, Mrs. Santa Claus-Perry!

She then goes on to say something that sounds eerily familiar. “But we also, however, have to have a floor under which nobody falls,” MHP says, “And if you’re below that – especially if you’re a child and you’re below that – we are not going to accept that. You do have the the right to health care, and to education, and to decent housing and to quality food at all times.” (emphasis mine).

Those, of course, were the words of one Willard Mitt Romney*, who was lambasted from public life for expressing the very same sentiment! Except in reverse! Let’s see if the liberal lamestream media takes Mitt-lissa Harris-Perry to task in a similar fashion.

Harris-Perry’s rant could easily be seen as a direct refudiation of the patriotic work of Tennessee State Rep. Stacey Campfield (R-Dickens Novel), who has come up with the brilliant idea of cutting welfare benefits for children who do poorly in school. That plan was summed up best when it was described as “reform which would create an incentive for parents to engage in their kids’ education by tying benefits to school performance.”

See, Republicans just want to treat everyone equally. If you’re rich, they want to give you an incentive to cut costs and make even more profits by cutting your taxes. If you’re poor, then they want to give you incentives like possible starvation and deadly illness to get you off your fat keister, and get you into one of the jobs the rich guys are cutting. If this seems unfair, then just explain to me how we’re supposed to threaten a rich guy with starvation. Can’t do it, can you?

Most tragically of all, though, Melissa Harris-Perry’s newest reign of terror on freedom threatens to dominate the news the way her last one did, creating news segment after news segment that could otherwise have been devoted to the Kermit Gosnell murder trial. I hope you’re happy, Ms. Harris Perry.

Here’s the promo, from MSNBC:

Author’s note: When I saw Melissa’s promo, I immediately thought of this satirical angle on it, and decided to write an absurd conservative overreaction to it. Upon completion of same, however, I (not so) shockingly discovered that several conservative sites had already parodied themselves in the same fashion. Look ’em up. I swear to you, I didn’t look at any of them before I wrote this. This is where the saying “You can’t make this stuff up” comes from.