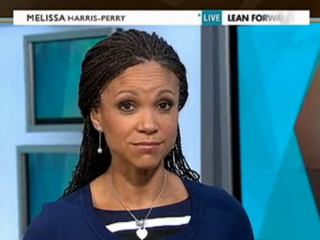 MSNBC doubled the power of its weekend talk show lineup this morning with the debut of Melissa Harris-Perry, the eponymous program hosted by the Tulane professor and longtime substitute host and guest on the network’s weekday programs. Following the familiar format of its temporal predecessor, Up with Chris Hayes, and using a similar (the same?) set with an instantly endearing splash of teal, it could not have been easy to make the first segment of the program feel unique to anything on the network. And yet Harris-Perry made her mark, having a Republican inaugurate the program, leading with a discussion on poverty in white communities and challenging the negative message Rihanna sends to young girls by reconciling with Chris Brown

“I want a more robust Republican Party,” Harris-Perry began her program this morning, describing the current GOP meltdown with some disappointment while being open about the fact that she wasn’t exactly on that team. This dismay, she continued to explain, arose from the belief that a two-party system was problematic for expressing a full political spectrum as it is; a one-party system would be, in her words, “a disaster.” Two healthy parties challenge each other to come up with better ideas, she argued, and both parties are hurt by one of them deteriorating. She then introduced her first guest, Cox, by displaying his wedding photo, standing next to his wife’s parents, President Nixon and the First Lady. The conversation touched on many of the large points about the Republican Party today– the role of the Tea Party, the Democratic policies that led to Rick Santorum somehow becoming a Republican frontrunner, where the future of the Republicans lies. Over the course of the show, after introducing her panel, Harris-Perry would return to this common theme, making an Overton Window-esque argument that President Obama had to contend with a significantly right-wing center, such that he could not shift his policies too far left.

When I first wrote about Up, I noted that its one major pitfall as a show was its lack of conservative or otherwise right-wing guests in its debut. As predicted, after a few weeks, the program has developed a regular roster of unorthodox right-wing guests to spice up the conversation, for which it is a far stronger show than it was in its inception (and it was a pretty strong show then, too). To avoid this fault, apparently, Harris-Perry debuted with a Nixon Republican on the set, and it paid off, if it can be kept consistent. As with all MSNBC shows, I most eagerly await an appearance at the round table here by Michael Steele, by far the most exciting and knowledgeable of the right-wingers on MSNBC. Yet this interview won’t be the most memorable moment of the debut.

The most memorable moment instead will be Harris-Perry tearing down Chris Brown, of all people, for his corrosive effect on society, and challenging Rihanna to do better as a role model than be caught hanging around with him. In a segment branded “Did She Really Say That?,” Harris-Perry argues that the overwhelmingly unfortunate responses to Chris Brown on Twitter– namely, young women lamenting that they will never get a beating from him– was a good thing, because it exposed the true damage that glorifying people like Brown in the media does to youth culture. What she deemed the “women need a man” culture, the case made in the media that women, and particularly black women, are better off beaten than single, was dangerous in ways previously invisible to most who didn’t have teen daughters or interacted with high-school girls. She did not deem Rihanna victim or enabler, but got close enough to that line to make the point that she isn’t helping anyone by making a public to-do about being friendly with a man who beat her.

The segment is notable because Brown simply doesn’t get the backlash he deserves on most media, and most of his peers in the music industry seem to desperately want to move on. But beyond that, it highlighted a power cultural issues have to unite people from across the political spectrum that often gets shoved under the rug in lieu of highlighting “culture wars” about birth control or gay rights. Often it is argued– correctly, many times– that culture is the only way to bridge political gaps across nations, that the Velvet Underground freed Czechoslovakia or Apple will be the key to opening up China. The same can be said of political factions within a country, and you’d be hard-pressed to find an issue more bipartisan in America today than how disgusting Chris Brown is. This seems silly, but is rather significant because it touches precisely on the core of all politics: what kind of country this generation in power wants to leave to its children. And if Melissa Harris-Perry can find something to agree with Andy Levy on as far as what kind of country we want to be, maybe America isn’t so polarized after all.

As with all infant shows, there is yet much to explore with how Melissa Harris-Perry will function and what it can bring to a family of weekend shows on MSNBC that finally feels complete. In its first installment, however, the show brought to the table conversations that are as important as they are interesting and achieved the most difficult thing in cable news today: it is unique.

Watch Harris-Perry‘s take on Chris Brown via MSNBC below: