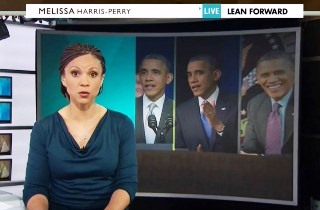 MSNBC host Melissa Harris-Perry opened her program over the weekend with a commentary about the Affordable Care Act’s colloquial moniker: “Obamacare.” She said that the word was originally created as a “derogatory term,” designed by white men as a way to delegitimize President Barack Obama and his achievement. However, she said that the term will soon be synonymous with all of Obama’s accomplishments and she urged her audience to use the term with pride.

“I want to talk today about a controversial word. It’s a word that has been with us for years, and like it or not, it’s indelibly printed in the pages of American history,” Harris-Perry opened. “A word that was originally intended as a derogatory term, meant to shame and divide and demean.”

“The word was conceived of by a group of wealthy white men who needed a way to put themselves above and apart from a black man; to render him inferior and unequal and to diminish his accomplishments,” she continued.

“At first, he rose above it, hoping that if he could just make a cause for what he achieved, his opponents would fail in making their label stick,” Harris-Perry added. “But no matter how many successes that he had as president, he realized there were still many people for whom he’d never be anything more than that one disparaging word.”

RELATED: Fox’s Wallace Grills Ezekiel Emanuel on Obamacare Enrollment, ‘If You Like Your Doctor’ Pledge

She said the president eventually embraced the term, and so should Obama’s supporters. “Because he knows that of all his victories over two terms in office his legacy is ultimately going to be remembered for this one single word,” the MSNBC host declared.

She closed by noting that “Obamacare,” is no longer the “derogatory term” it was originally conceived to be. Like the historic accomplishments above, the ACA will soon be widely regarded as a celebrated accomplishment.