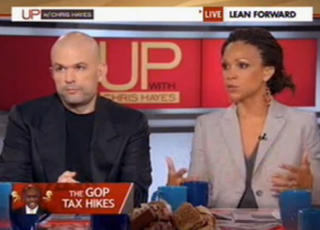 With the national debt and its effect on the economy being the top issue of the 2012 campaign, the panel today on Up with Chris Hayes debated the various merits of the Republicans’ tax plans, and one bit of rhetoric from Rep. Michele Bachmann struck panelist Melissa Harris Perry as transcending policy grounds and just flat out racist: the proposition that there is a sector of the population, as host Chris Hayes put it, that are “producers” and another that are “leeches.”

The comment in question from Rep. Bachmann was an argument on her part that taxes should be raised on those who don’t pay any– “we need to get more in line,” she told a crowd, “because everyone… should pay something.” She also cited a statistic that only 53% of Americans pay taxes. “I think that’s just racism,” Harris Perry argued, likening it to the “2011 version of the welfare queen.” “What that is meant to imply is that there is a whole group that is dependent,” she explained, and the subtext to that being that the group is comprised of “unworking, unmarried poor black women who are welfare queens.” The “53%” talk, she concluded, was “just a way of evoking all of these scary, racialized, and poor others.”

At this point, panelist Kevin Williamson of the National Review jumped in– not to correct Harris Perry, but to note that the stereotype is “probably true”– those who are dependent, he argued, “tend to be poor, unmarried young women.” After the inevitable crosstalk that elicited from the panel, they returned to the racialized subtext in Republican language, which Hayes found to be an increasingly less pervasive issue. “The amount of racial coding… has declined,” he suggested, since he began covering politics. That others on the panel found to be a sign not that racism had eroded, but evolved. Harris Perry in particular noted that rhetoric had been “so effectively racialized” that “you don’t have to do Willie Horton anymore, you can just say ‘crime.'” Whether the word “crime” standing by itself is inherently racist is certainly debatable, thought the panel seemed to agree that anti-“leech” rhetoric could easily take a turn against ethnic minorities as opposed to class groups.