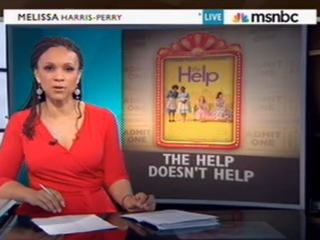 When The Help first came out, Melissa Harris-Perry quickly became one of its most vocal critics, arguing that the film sets back black actors by reducing them to the role of maids and glossing over some of the more heinous aspects of the black domestic worker experience. Now that the film is among the buzzworthiest at the Oscars tomorrow, Harris-Perry revisited the film today on her eponymous program, reiterating that the obfuscating of serious concerns for black women in the service industry was particularly problematic.

The film, she told her audience today, “erases and then rewrites a rich and robust history in which black women never needed someone to speak for them” by making the protagonist a white woman. She explained that the real protagonist who grows as a person is white, while the black characters are there to feed her growth. In this manned, the film erased a horrid reality about the service industry at the time: “for black maids, the threat of rape was always a clear and present danger.” She clarified that she had nothing against the actresses in the film and meant it only as a criticism of Hollywood that they “would have to use their extraordinary talent” to portray maids, a role black women have had in film for decades.

Her panelists agreed– Micki McElya noting that beyond the glossing over of the rape issue, it was problematic to promote the idea that “the black woman working in a white household is there because she loves to be there” and thus doesn’t need reasonable hours or pay, and is willing to do anything. Leader of a domestic worker action network Barbara Young was actually the most sympathetic towards the film, and particularly the “humanizing relationship between the domestic worker and the child,” a point Harris-Perry agreed was positive, as it showed the capacity for compassion across classes. Elon James White, the lone man on the panel for this segment, was just as offended with “they disneyfication of this deep thing” and the idea that The Help was a black film when “it was more like a white woman’s coming of age, [but] sprinkle a little oppression over it.”