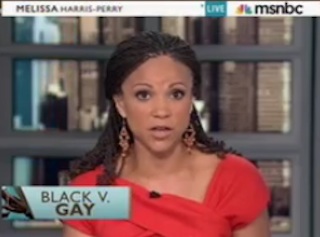 On Melissa Harris-Perry‘s eponymous MSNBC program Saturday, she hosted a panel that focused on North Carolina’s Amendment 1, which is up for a vote on Tuesday to approve a constitutional amendment to say that a marriage between one man and one woman is the only domestic union to be valid and recognized by the state. Perry observed that a leaked memo from the National Organization of Marriage stated that the strategic goal of the amendment was to drive a wedge between gays and blacks, two of President Obama‘s key constituencies.

Harris-Perry felt that national civil rights organizations needed to be making a stronger stand against ballot initiatives like Amendment 1.

“It does feel though that our national civil rights organizations, the NAACP, the SCLC, they have not taken a national stance on issues of LGBT equality,” Harris- Perry observed.

LGBT policy and racial justice advisor Aisha Moodie-Mills opined that conservatives were using the amendment as a backdoor for discrimination.

“This is bigger than simply LGBT equality and LGBT rights. When you think of what’s really happening, conservatives are creating a smoke screen for discrimination, they are trying to pit black folks against gay folks as if the two communities are mutually exclusive, which is ridiculous,” Moodie-Mills said. “Here I am a black lesbian, as a member of both, straddling the intersections of both, but they are doing that as a smoke screen to hide the fact that they’re trying to discriminate against the minorities and roll back the hands of time in terms of our rights and opportunities in America, and they should be using these resources on this ballot measure to get North Carolina’s economy back on track but instead they’re wasting time, they’re wasting money and it’s redundant, because what folks don’t know is that same-sex marriage is already illegal in North Carolina. the legislature took part of that.”

Harris-Perry wondered where gay rights groups were when black organizations were rallying against injustices in their communities, laying blame on organizers.

“And yet, it in part happens because of actively what happens in the organizing communities, and that is what I want to put to head here, on the one hand, I want the NAACP to come out clearly on the civil rights issue of marriage equality but I would also like to see where are HRC and GLAAD when we are marching for Trayvon Martin and — I mean, like I want us to be allies, but i need the allies to be on both sides.”

Colorlines’ Kai Wright contended that both groups were working together, just not on a national level.

“There is a great deal of really important work going on both in the racial justice community and in the lesbian, gay, bisexual, and transgendered communities and where you see it is not at the national levels, but the local organizing level, and that is an important thing to drilling down on and talking about how to support it.”