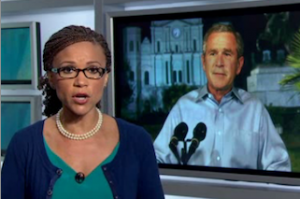 The George W. Bush Presidential Library and Museum opened its doors to the public last week and this morning MSNBC’s Melissa Harris-Perry delivered a highly critical open letter to former president Bush about the exhibit dedicated to Hurricane Katrina.

You have long held that history will be the ultimate judge of the decisions you made while president,” Harris-Perry said. “But with the Decision Points Theater exhibit at your library, it looks like you are planning to give history a little nudge in a direction you find favorable.” She said that as a post-Katrina New Orleans resident, she was shocked to see that “according to your exhibit the main problem you faced [after the storm hit] was how to restore law and order. The big issue that visitors are asked to resolve, is whether or not you should have invoked the Insurrection Act to control the looters.”

She ripped Bush for trying to figure out whether or not to quell an insurrection” while nearly a thousand Louisiana residents died in their homes and thousands more were trapped in the Superdome. “The decision you should have been making, sir, wasn’t on how to quell them. It was how to save them.”

Harris-Perry played a clip from one of Bush’s recent interviews, in which he told CNN’s John King how he’s trying to take it easy and “live life to the fullest.”

“Well, that’s cool, Mr. President,” Harris-Perry said. “I am glad that you are slowing down, catching your breath and finding a way to live life to the fullest. In the meantime, tens of thousands of New Orleanians are still trying to find a way home, still displaced by the policies of your administration, still reeling from the failures of your decisions. But hey, ‘Heckuva job, Dubya.'”