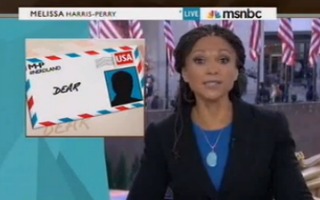 On her program Saturday, MSNBC host Melissa Harris-Perry shared her open letter to former FEMA chief Michael Brown over his comments following Hurricane Sandy, particularly his remark about why it was that Obama decided to “jump on the hurricane so quickly.”

So, I hear you have a few choice words for President Obama about his response to Hurricane Sandy. You actually said, “One thing he is gonna be asked is, why did he jump on the hurricane so quickly and go back to DC so quick?” Um, actually, no. No one is going to ask the President of the United States why he responded so quickly to an unprecedented weather event threatening millions. Why? Because while it’s bad manners to show up early for a dinner party, it is actually a really great idea to show up early to disaster response. I am a little taken aback that you don’t already know this after you and your boss, “W,” fumbled the response to Hurricane Katrina. Your failures became the impetus for a 218-page report.

The report reads “FEMA’s efforts to support state emergency management and to repair the federal response and recovery in natrual disaster were insufficient for an event of Hurricane Katrina’s magnitude. your agency was described as ‘overwhelmed’ the first week after landfall.”

Maybe FEMA was overwhelmed because you, the director, were given full authority to respond to Katrina on August 27th, but didn’t request Homeland Security workers for four hours after katrina hit on the 29th. Maybe it was your decision to only send 100 buses to Louisiana after the National Guard requested 700 for evacuations. Or maybe it is because in the midst of a crisis, you were busy sending cute e-mails to your staff about your clothing choices and joking, “I’m trapped now, please rescue me” as New Orleans was actually trapped without food or water.

So, remember when two days after Katrina hit and a FEMA employee told you the situation is past critical and listed problems — including many people near death and food and water running out at the Superdome — your entire response was, “Thanks for the update. Anything specific I need to do or Tweet?” But it’s not all your fault. You never should have been in that role. After all, you had no experience or qualification, having been a lawyer for the International Arabian Horse Association. Which is perhaps why President Obama, unlike your boss, chose an experienced disaster manager to head FEMA.

After listing Fugate’s qualifications for the job, Harris-Perry concluded by saying, “You see, Brownie, President Obama didn’t begin preparing for Sandy on Sunday. he started in 2009 when he appointed a qualified responsive leader to manage FEMA.” She did thank him for his comments, though, because they serve to highlight what would happen if America were to elect “another Bush.”

So to answer the question posed by Brown in one of his Katrina-related emails, Harris-Perry assured him that “the answer is yes. Yes, please, quit now. Sincerely, Melissa.”