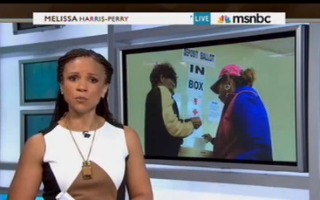 On her show Saturday, Melissa Harris-Perry addressed an open letter to Ohio Secretary of State Jon Husted over his efforts to reduce the number of days — and then hours — that Ohioans could vote.

“Dear Secretary Husted,” she began. “It’s me, Melissa. Can I call you Jon? How you feeling today? Still a little sore, I’d imagine. Getting beaten so forcefully with all that backlash had to sting a bit. Probably going to leave a mark. After all, you spent the better part of this year throwing the full force of your power as secretary of state into restricting the right of some Ohioans to vote.”

Harris-Perry offered her viewers a rundown of Husted’s efforts to alter voter access in his state, then noted how they were consistently called out and defeated:

Last Friday, you issued a directive in opposition to Ohio election statutes to put the burden on voters for mistakes written on provisional ballot forms, all but ensuring that some of them would get thrown out. Once again, the courts will not be fooled by your shenanigans. And in a hearing disputing your directive on Wednesday, a federal judge said that, quote, “It was filed on a Friday night at 7:00 p.m. The first thought that came to mind was ‘Democracy dies in the dark.’ So when you do things like that, that seeks to avoid transparency, it appears then, that gives me great pause, but even greater concern.” The voters response to your tactics? Not only did African-American voters not get suppressed, we turned out in historic numbers. In Ohio, African-Americans comprised 15% of the electorate. That is up 11% in 2008 and nearly 200,000 more votes. Latino voters also turned out in larger numbers and made an even stronger showing for president obama than in 2008. And that’s all despite the long lines that wrapped around blocks and hours-long waits in frigid temperatures to vote.

Because you see, Jon, those voters that you tried to suppress have a long memory. They remember when people like them faced literacy tests, and poll taxes, and arrests, and beatings, and lynching, and burnings, and shootings all in a right to vote so they would not be deterred by a lack of patience and uncomfortable climate and they would certainly not be deterred by you. And Jon, there is something else you should know about the memory of those voters. In 2014, when you’re up for re-election, they’re also going to remember what you tried to do.