Melissa Harris-Perry To Bobby Jindal: If All You Want Is To Reach Higher Office, Pull A Palin And ‘Quit Now’ 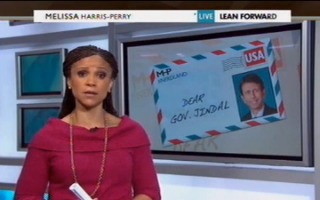 After asking him if he preferred to be called by his birth name (Piyush), Harris-Perry pointed out to Jindal that he is the governor of a poor state, “but you don’t seem to give a damn:”

What you do care about is reaching higher office. And why not? Your term limited in Louisiana and the White House will have an opening in four years. So for you, it’s onto the next one, right? Looks like you’re 2016 machine is raring to go. Head of the Republican Governors Association? Check. Chastising the defeated Governor Romney for his gifts comments? Check. Calling on Republicans to stop being the “stupid party of dumbed-down conservatism” and encouraging them to reach out to a broader base? Check. Not bad for the national stage, Bobby.

But what about your own backyard? Those Louisianians without health insurance could benefit from the Medicaid expansion that President Obama’s Affordable Care Act would provide. Because in Louisiana, more than 68% of those Medicaid recipients are poor children. But you’d much rather lead 15 other states in massive resistance against so-called big government and tell your constituents “good luck” in the private sector. And speaking of the private sector, seems like you’d also like to sell off our kids’ education to the highest bidder. That educational voucher system you established — the largest one in the country, the one that gives vouchers to religious schools that teach creationism and allows them to keep their state funding even if their students fail basic reading and math tests, that one? We’re not fooled. This is not about reform. It is about, as the Interfaith Alliance wrote, your inability to distinguish between religious indoctrination and basic public education. And you think you might be just a little bit more suspicious of the whole private sector equals public good equation in the week when BP pled guilty to 14 criminal charges in connection with the Deepwater Horizon’s rig explosion just off our shores two years ago. You chastised President Obama’s energy policy by saying it was “subservient by-product of his radical environmental policy.” But even as our fragile coast loses a football field of protective wetlands every 38 minutes, you, Bobby, remain in favor of new drilling parcels, hydrofracking, and the keystone XL pipeline. Just who is the environmental radical?

Don’t be hesitant to “pull a Palin” if you want to move on, Harris-Perry urged Jindal: “Quit now. We’ll find somebody else. Because, you know, as we say in Nerdland, #fbj. Forget Bobby Jindal.”