Memo to Cable News: Learn the Difference Between ‘Isolationism’ and ‘Non-Interventionism’

Media Should Learn the Difference Between 'Isolationism' and 'Non-Interventionism' 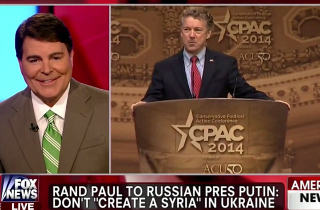 When The Hill‘s managing editor Bob Cusack suggested that Paul has attempted to distance himself from the foreign policy views of his father, ex-Rep. Ron Paul, Jarrett had this reaction: “Yeah, the father was an isolationist, though he preferred the term ‘non-interventionist.'”

Well, actually, there is. And it’s a huge difference. Such a gaping one, in fact, that it’s stunning how Jarrett and other cable news anchors, pundits, and reporters happily botch the distinction. One can only assume they do it for the sake of mocking kooky, old Ron Paul (as Jarrett’s giggles betray) or having just not bothered to comprehend the distinctions.

So here’s a primer on isolationism. Learn it:

Ron Paul and other prominent libertarians believe in opening up trade with Cuba, ending sanctions and promoting “peace through prosperity.” Tell me, exactly, how that is “isolationist”?

“Non-interventionism,” on the other hand, means being opposed to “entangling alliances” abroad and the interference in and/or starting of military action. All while supporting freedom of commerce, travel, and immigration.

Want to see a tried and true isolationist? Try former presidential candidate Pat Buchanan. He speaks out against military intervention abroad, yes, but he also opposes free trade, immigration, and reduced tariffs. That’s the definition of wanting to isolate America not just militarily, but culturally and economically. A far cry from what the Pauls advocate.

Using TVEyes for retrospective research, a quick glance of Fox, MSNBC, and CNN shows that all three networks frequently use the term “isolationist” to describe the Pauls and libertarian-leaning Republicans’ foreign policy views.

Cut it out already.

And, hey, thanks to modern technology, cable newsers can watch and learn from their mistakes, via Gregg Jarrett’s embarrassing Fox display: