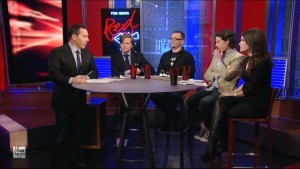 As speculation begins regarding what Fox News plans to do with the afternoon time slot after Glenn Beck‘s departure, another question looms that hardly anyone is focusing on: what happens to the late night time slot where Beck’s show normally repeats? Conventional wisdom would suggest that whatever show replaces Beck in the afternoon will also get the middle of the night replay. However, given that real estate rarely opens up on the Fox News schedule, this is the time to suggest that Fox News shake-up late night and move their hugely entertaining and criminally underappreciated program Red Eye up from its current graveyard shift.

First, why does Red Eye deserve the larger audience that would no doubt be waiting for it at an earlier time slot? Besides regularly featuring intelligent debates, provocative guests and hilarious comedy bits, Red Eye is unique in that it is basically the only conservative answer to many left-leaning successful comedy shows like Real Time with Bill Maher, The Daily Show with Jon Stewart and The Colbert Report. Today’s generation of young information seekers often prefer to be entertained while getting the news and Maher, Stewart and Colbert can often be the only means by which some young people stay informed. Red Eye can serve a similar purpose and fill the comedic void that young conservative-leaning Americans no doubt desire.

Why then should Red Eye move to an earlier time slot in the Eastern Time Zone? Let’s look at the late night schedule of Fox News. Currently the repeats of The O’Reilly Factor are so successful that it wouldn’t make ratings sense to tinker with it. Then comes the replays of Sean Hannity and Greta Van Susteren, which do fine in the ratings, but who really needs to see Hannity twice in one night? The question should be considered, with no insult implied, are viewers specifically tuning in for either Hannity or Greta at that later time, or might they be watching Fox News regardless? I don’t know the answer, but I do argue that moving Red Eye into either of those slots would generate additional viewers tuning in specifically to watch the antics of host Greg Gutfeld, Andy Levy and Bill Schulz. Especially in the modern era of television where fans of certain programs regularly DVR their favorite shows and time-shift it to watch it on their own time, couldn’t the many fans of Hannity or Greta DVR the first airing, rather than rely on the later repeat?

Some Red Eye fans might worry that moving to an earlier time slot might force Red Eye to lose its comedic edge. Much like fans of Conan O’Brien feared (rightfully) that a move to earlier in the night would change him for the worse, this concern might be legitimate. However, I think the greater exposure of an earlier time, along with the potential for bigger name guests and more promotion would enable Red Eye to seriously compete with many other late night entertainment programs. And at the very least, a move to Beck’s replay time slot should be considered and wouldn’t be too controversial. A friend of mine, New York City attorney Neill Gorman (a long-suffering insomniac and Red Eye fan-by-default) believes that the show would flourish in Beck’s place, predicting that “the show’s saucy antics would draw a loyal audience of conservatives and liberals alike – you’d even have Media Matters people tuning in on their day off. Take down the chalkboard and make room for unicorn art!” For the uninitiated, apparently Gutfeld loves unicorns.

It’s time for many more viewers to open up their eyes to Red Eye, and hopefully if the move does take place, a catchier slogan would be used in the promotion.

Watch one of Red Eye‘s recent clips below from Fox News: