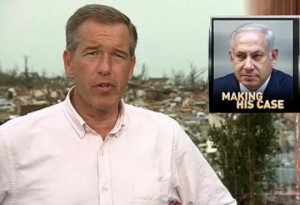 On Wednesday night’s The Last Word, MSNBC’s Lawrence O’Donnell delivered a spot-on critique of the way President Obama‘s remarks about Israel have been handled by the news media, and others. The false charge that the President has “called for Israel to return to the 1967 borders” has come tripping off of many a tongue, including O’Donnell’s NBC News colleague Brian Williams, barely a day earlier.

Williams introduced an NBC Nightly News segment Tuesday night by saying that Israeli Prime Minister Benjamin Netanyahu “will not, as President Obama has called for, return to (Israel’s) borders before the ’67 Mideast War.” (emphasis mine)

Williams might as well have said that Netanyahu “will not, as President Obama has called for, start a professional Kitten Skeet Shooting League,” for all the relationship his statement had with reality. President Obama did not call for a return to the ’67 borders, and if Williams didn’t know it, either of the two NBC reporters who attended Jay Carney‘s briefing on the topic, minutes after the Obama/Netanyahu meeting, should have clued him in. Here’s what Carney told reporters that day:

Q    But on the issue of borders, I know the President didn’t specifically bring this up in the pool spray, but Prime Minister Netanyahu did.  He said that going back to the ’67 borders is indefensible.  How does that square off with what the President said yesterday?

MR. CARNEY:  Well, I think what the President said yesterday was quite clear.  The President said the borders of Israel and Palestine should be based on the 1967 lines, with mutually agreed swaps, so that secure and recognized borders are established for both states.  That is a formulation that has been understood by parties to these negotiations and by anybody who’s been a close observer of these negotiations in this region for years.  He felt it was important to articulate that.

The security issue here is recognized by the President, was recognized clearly by the President in his speech yesterday and again today in the Oval Office.  He made clear that every state has a right to self-defense, that Israel must be able to defend itself by itself against any threat.  He made clear that security provisions must also be robust enough to prevent a resurgence of terrorism, to stop the infiltration of weapons, and to provide effective border security.

And I think that, again, anybody who knows this issue knows that this has been an understood starting point for resolving one of the four major issues between these two peoples, which is territory, for a long time.

Q    But I guess the question is then what is happening today on the U.S. side —

MR. CARNEY:  Do you mean, did they resolve the Arab-Israeli — I mean, the Palestinian-Israel negotiations today?  No.

Q    Is there progress being made to get the Israeli side to move closer to the U.S. position on the border issue?

MR. CARNEY:  I’m not sure that I accept that he was mad.  I think they had an excellent meeting.

MR. CARNEY:  No, no, he said the borders — first of all, it’s important to understand — I mean, I shouldn’t have to parse words from the President or the Prime Minister.  He said the borders were indefensible.  That’s an issue about security —

There are legitimate grounds for criticism here, although O’Donnell’s explication of the necessity of Netanyahu’s posture renders much of it moot, but there is no wiggle room on the fact that President Obama did not do what Williams said he did. Compounding the error is the fact that, despite heated ratings competition among cable news channels, they represent only a fraction of the broadcast networks’ audience size. When they get it wrong, tens of millions of Americans get it wrong.