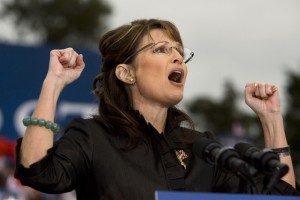 Anyone paying close attention to my past memos knows my mixed track record. Indeed, I have suggested ABC replace Christiane Amanpour with Jake Tapper and advised CNN drop Eliot Spitzer instead of Kathleen Parker, only to watch Amanpour flourish and Spitzer improve. So someone in my position might have the good sense to stop sending memos to anyone.  But never fear, I follow some much repeated advice from at least one omnipresent political media personality: don’t retreat, reload!

So I’m taking this opportunity to hopefully change the course of history and attempt to prevent what would be a huge tragedy — and not just for those in the media who love to cover opinion media and politics — but also for America, and heck why not, the world. With the recent suspension of Newt Gingrich and Rick Santorum by Fox News Channel, a painful reality for many is beginning to settle in: Sarah Palin might not run for President. That would be a big, big mistake, and here’s why.

Most political observers are praying for Palin to enter the presidential race simply because, love her or hate her, Palin makes everything more exciting. However, this sort of thinking often comes with a pretty clear and cynical undertone, as many feel she is too polarizing a character, and that as Obama’s opponent, the sitting president will effortlessly sail towards a second term. Especially with established conservative power players like Karl Rove continuing to dismiss her as nothing more than a reality television star, it wouldn’t seem unlikely for even Palin to begin doubting her own abilities. Palin herself said she would only run for President “if there’s nobody else to do it, then of course I would.” I have arrived to tell you Sarah, there is nobody else who is planning to run that can be as universally inspiring to both the conservative and Tea Party movements, and no potential candidate who can combine your level of unpredictability with an ability to simply and directly communicate to the American people. But even more importantly though, Sarah — can I call you Sarah? — your time is now or never.

The uninspiring cast of characters range from previous failed presidential contenders like Romney, Huckabee, Giuliani and Paul to charisma-free bores like Pawlenty and Daniels to “why even bother” candidates like Santorum and Bolton. So it should come as no surprise that Gingrich is a leading contender, because he at least is a “fresh” face to presidential politics and capable of occasionally being provocative. However, one problem underlying all of these candidates is that none of them can fire up a crowd like Obama. Palin can. Another problem is that none of those Republicans generate interest with every media interview like Obama always did as a candidate and continues to do as President. Can Palin generate interest with every media interview? Yes she can.

The only Republican who can rival Palin in excitement is New Jersey Governor Chris Christie, and he has repeatedly stressed he is “not ready,” in other words, his chances for victory in 2016 are too hard to resist. And since Jeb Bush seems to be waiting for that time as well, Palin’s star will most certainly be eclipsed by then. The quest by Republicans to stop a second Obama term can be waged most dramatically by Palin and, dare I say, she might even be the only one to mount it successfully. However, it can only begin if and when she is convinced she should enter the race.

Sarah, it is time to listen to your own advice. Don’t retreat, run for President.