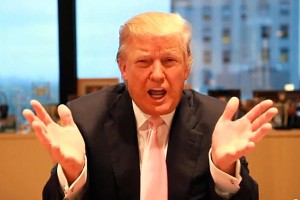 If you’re not familiar with the concept of internet trolling, here’s a quick summary. Someone is bored and so they decide to post a deliberately incendiary comment (in many cases, a political one) on a website, which immediately sets people off. Some people are shocked at how mean this person could be, others insult them with everything they’ve got. The entire thing turns into a giant flame war with people arguing with each other about something that has nothing to do with the topic addressed in the original post. (And from what I’ve observed from the comments sections on this site, I’d say we have a few of those here too.)

I say all this to give some context to Donald Trump‘s unbelievably transparent attempt at trolling the presidential race. This is an election about substantive issues, and what does Trump to? He deliberately derails it with some nonsense that no one cares about, thus setting off an army of pundits criticizing him for sounding ridiculous. Trump is denying that this is a publicity stunt, and it may not be one. But there’s no way he actually believes this crap. It’s the same thing as when he touted birtherism.

But after so shamelessly falling for Trump’s birther act, the media is right back at it again. He touted a big October surprise that would completely change the tone of the presidential election, and his surprise wasn’t something that he could supplant with evidence, but a deal he has for President Obama to get his college transcripts, which no one was talking about and very few people were raising alarm bells over.

When you feed a troll, you give them more ammunition. Cut them off. Don’t give them the attention, which is clearly what they want. Donald Trump hasn’t just returned from the looney bin, he’s just saying things for the publicity.

Ignore him. Don’t give him any credence or credibility. Don’t invite him on your cable news show to defend what he said because there’s no rational defense for what he said. Every time you let him justify this trolling, he gets another channel from which he can continue trolling. Cut him off. Enough of this crap. Trolls feed off outrage. The less time we spend being outraged at Trump, the sooner this will go gracefully into that good night.

Until the next time Trump opens his mouth.