Meredith Vieira On Romney’s Deeming The View ‘High Risk’: ‘Wouldn’t You Be’ Scared If You Were Him?
video

Meredith Vieira On Romney’s Deeming The View ‘High Risk’: ‘Wouldn’t You Be’ Scared If You Were Him? 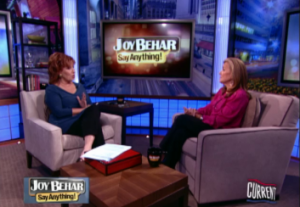 Meredith Vieira sat down with Joy Behar on Current TV on Wednesday, offering her thoughts on Mitt Romney‘s remarks about The View — as well as whether the press has been tough enough on both Romney and President Barack Obama. (Spoiler: nope.)

RELATED: Romney To Sit Down With ‘Sharp-Tongued’ Hosts On The View

Behar began by noting Romney’s thoughts on The View, which he expressed in the recently leaked video that’s been making headlines for his “47 percent” remarks. In essence, he deemed it risky.

“The View is fine, although The View is high-risk, because of the five women on it, only one [Hasselbeck] is conservative and four are sharp-tongued and not conservative, Whoopi Goldberg in particular. Although last time I was on the show, she said to me, ‘You know what? I think I could vote for you.’ And I said I must’ve done something really wrong.”

Responding to the clip, Vieira stated plainly, “Yeah, he’s right” — further quipping, “He showed more insight in that moment than he has throughout the entire campaign actually.”

Asked whether Romney’s “kind of scared” of the show’s co-hosts, Vieira replied, “Well, sure, but wouldn’t you be? If you were him?” The show “is somewhat liberal,” she noted. “You’re very fair-minded, and you try to be, but you’re tough.”

Vieira additionally noted that the audience is largely female, and Romney “needs those votes,” so it’s understandable that he would avoid the show.

“On the other hand, should he be scared of four sharp-tongued women, as opposed to millions of people that he will have to be the president of?” Behar questioned. “[Iranian president Mahmoud] Ahmadinejad is not exactly a pussycat — he’s gonna have to deal with him, right?”

Segueing into the broader topic, Vieira said the media could be doing a better job, upon Behar’s noting that Meet the Press‘ David Gregory gave Romney “softball” questions.

“But I think the press could be tougher on both of them, to be honest with you,” Vieira said. “Obama gets a lot of softballs too. And this is the time to do it.”

“Especially with regard, to me, with Afghanistan now,” she continued. “I’m furious. I want to know why we’re staying there one day longer. And what their game plan is. I don’t get it at all.”

The segment below, via Current TV: