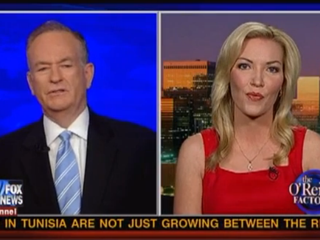 Captain Nicole Mitchell balanced her military service with her job as an on-air meteorologist at the Weather Channel fairly well, until NBC bought out the network and began fabricating scheduling conflicts for her until she was pushed out of the job. This was the story she told to Bill O’Reilly tonight, who wondered whether the “very liberal” thinking at NBC had to do with the way her service was treated.

“I consider myself tremendously fortunate,” Mitchell told O’Reilly, because “I have emails, which a lot of people don’t have,” to use in court in her lawsuit against the network. She was told her contract would not be renewed after returning from military service. O’Reilly asked her to clarify, since “the Weather Channel is not particularly for ratings, it provides a service,” and that it seemed that “they never gave you a hard time, the old management– then NBC takes over and you are subject to scrutiny.” She agreed that the management was “setting you up.”

“Especially some of the things were– one weekend it was over a hair consultation, and if you’ve know for months I have military obligation, why [interrupt] for something so frivolous?” She described the problems as a “loyalty test,” and something that many people go through with management who are in the military. She did not think that it was an ideological issue, as “I’ve had support from people of all political views– it was a bad management problem, people that were arrogant.”