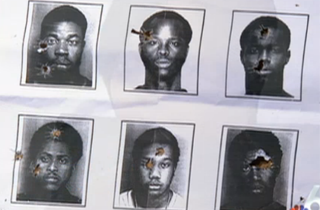 A Miami police department was forced to explain why they used six photos of actual human beings — who happened to be adult black men — as target practice for their sniper team.

One of the families plans on suing a Miami police department after they learned that they’d used a photo of their son for target practice — with his sister discovering that police had been shooting at his face when she visited a shooting range as part of her National Guard duties.

The photo of her brother, Woody Deant was taken fifteen years ago when he was arrested and convicted for participating in a drag race that left two dead. “The picture actually has like bullet holes,” said Deant, telling NBC that he’d now cleaned up his act and had a 9-to-5 job. “One in my forehead and one in my eye.… I was speechless.”

North Miami Beach Police Chief J. Scott Dennis admitted that while his department could have used better judgement, he said that using mugshots of actual people did not violate department policy. But according to every other police department interviewed by NBC, as well as a retired FBI agent, it’s common practice to use commercially-produced targets that don’t portray actual human beings on them.

“I think the police have to be extra careful and sensitive to some issues that might be raised,” said retired FBI agent Alex Vasquez.

Watch the report below via NBC Miami: