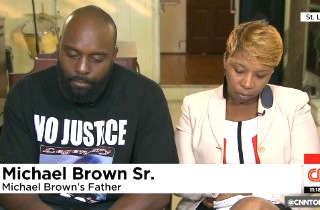 The parents of slain 18-year-old Michael Brown spoke out tonight on CNN. As she spoke with Don Lemon, Brown’s mother Lesley McSpadden broke down crying on camera as she mourned the tragic loss of her son. She talked about how her son was going off to college and now her family has been robbed of seeing that progression of his life. Brown was fatally shot by police this past weekend in Ferguson, Mo.

As Lemon spoke with her, McSpadden broke down crying. She quickly composed herself and said, “I’m gonna be okay, but right now I’m not.”

Michael Brown Sr., meanwhile, wore a shirt that read “No justice, no peace.” He explained, “My son don’t have justice and we don’t have no peace. If he has no justice, we won’t get no peace.”

The shooting inspired much outrage, with instances of rioting and looting happening over the weekend. And tonight in Ferguson, shots have been fired and police have been firing tear gas to disperse protests in the streets.

UPDATE — Tues., Aug 12, 12:25 p.m. ET: This article previously stated that this was the first interview the Browns had given to cable news. It was not. Their first was during the 6 p.m. ET hour with MSNBC’s PoliticsNation.