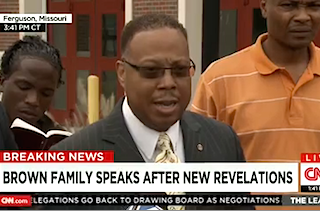 In light of the release by Ferguson police of photos purporting to show Michael Brown engaging in a robbery at a convenience store shortly before he was shot and killed by a police officer Saturday, the family’s attorney Anthony Gray held a press conference Friday to address the relevance of that incident to the shooting.

“Let me be real clear to everyone here that this family has never said that Mike Brown, Jr. was a perfect kid,” Gray said at the top of the press conference, before moving on to address the alleged robbery photos directly.

“The family feels that that was strategic,” Gray said of the timing of the release. “They think it was aimed at denigrating their son, it was a character assassination attempt. That is pretty much the sentiments of everyone that I’ve discussed. They think the timing is suspect.” He accused the Ferguson police chief of “inciting the community all over again” now that things have finally calmed down.

“We were finally getting to a point where we were starting to just galvanize the questions that everybody was curious about,” Gray added. “And now, we’re focused on the sideshow.”