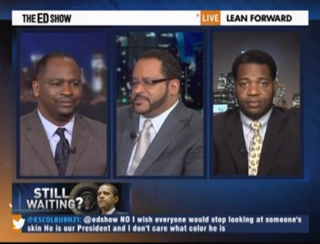 President Obama’s most stable lead demographically, according to most polls, is among the black community, but on MSNBC tonight, Frederick Harris made the case to host Michael Eric Dyson for the President having, in some ways, not fulfilled most of the promises he made to African Americans, and of getting far more credit for addressing issues specific to the black community than he actually has.

“This is a very messy environment the President is working in,” Harris told Dyson, arguing that sometimes he had addressed complaints from the right that would always be there, and that “there are issues that need to be raised no matter who is in the White House,” but had been left unattended more than he would have preferred from someone like President Obama. James Peterson, who was on the panel as well, responded that he found that there were many things President Obama had done for the black community that he did not get enough credit for– appropriation of funds to HBCUs, a White House Commission on Urban Affairs, and some of the provisions in the Affordable Care Act that targeted impoverished minority communities, for example. Dyson added that the President was also in a tricky situation where mentioning racially-charged issues caused a backlash, cases like the Trayvon Martin killing and the Henry Louis Gates arrest.

Harris suggested a solution: “targeted universalism– you target particular social policies geographically, to areas impacted most by unemployment, high levels of poverty.” He argued that there needed to be “some innovation” in how to do that, that the White House needed to “understand the racial dynamics of those communities.” Peterson countered that he thought “we are very reluctant to give the President credit for what he has done for our community,” adding that he did not think Harris was “saying President Obama is not black,” but that the accomplishments of the White House were not enough for minorities and the black community in particular. Of those accomplishments, Harris refused to refer to them as “major,” which prompted Dyson to ask, “so he’s failed us?” Harris gave the President a “C+/B-.”