Michael Eric Dyson Blasts Tim Allen For ‘Wanting Back In’ On N-Word: ‘Mad We’ve Made More Sexy Use Of It’ 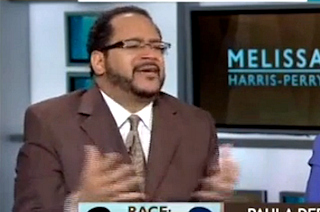 Melissa Harris-Perry and her panel took on Tim Allen’s recent argument that white comedians should use the word “nigger” as opposed to “n-word,” arguing that the euphemism has become more offensive than the word itself. Harris-Perry commended Allen for showing “some thoughtfulness” in his remarks, but the panel still took issue with Allen’s presumptuousness, with Michael Eric Dyson savaging Allen for “wanting back in” on a word white people invented for the sole purpose of subjugating African Americans.

“He wants to move from ally to reassume the appropriate privilege of whiteness, which is to dictate the terms of the debate,” Dyson said. “Look, y’all invented the n-word. We didn’t invent it. We just co-opted it. We hijacked it. We did a carjacking on that word a few decades ago, and now you’re mad because we’ve made more sexy use of it—some denigration as well. And now you want back in? No, you can’t have back in.”

“I refuse to infantlize white people,” Dyson continued. “He says it’s confusing to me. It ain’t confusing! Here’s a general rule of thumb to follow when using the n-word for white people. Never. When you do that, then you understand you can’t do it.”

“And finally what’s interesting here is that using this kind of word—as Chris Rock said, white people control the whole world but they feel if they can’t use the n-word, somehow their power has been removed? No! Grow up, allow us to determine what is in and out. As a result of that, be our ally and challenge white people not to use it at home. You’re already using it. You just want to use it in public.”

Allen had made the argument that the use of the word would better distinguish lack of racist intent, a point with which Jonathan Rosa, an assistant professor of anthropology at UMass Amherst, strongly disagreed.

“If Tim Allen wants to carve out a space for himself in which he can use language however he wants, go for it and try it out and see if that works, and see how it’s received, right?” Rosa said. “But this notion that ‘You know what’s in my heart, you know what I really believe,’ is not entirely unlike Rand Paul’s commentary, ‘I don’t have a racist bone in my body, so if you know what’s really in my heart, then I can say whatever I want.’ Which really undermines the idea that language shows us what’s in your heart, right?”